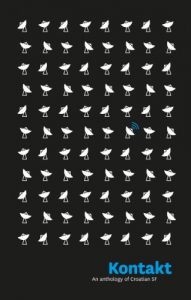 From the Wizard’s Tower Press website: “The original paperback edition of Kontakt was produced in conjunction with the 2012 European Science Fiction Convention (Eurocon) in Zagreb, and given away free to members. It has never been generally available for sale. All of the stories in it are translated into English, with the intention of showcasing Croatian science fiction and fantasy fiction to the wider world.”

The authors included in this collection have won SF awards and been published extensively in Croatia. Many have won SFera (science fiction society) awards, while Darko Macan’s “The Corridor” won the Lapis Histriae, and Zoran Vlahović’s “Every Time We Say Goodbye” received an honorable mention in the 2013 Science Fiction and Fantasy Translation Awards.

Here’s the table of contents:

In talking about this anthology to friends and colleagues, I’ve found myself saying repeatedly that it’s so engrossing and exciting because I never know what the next story will be like. One will suck you in to a horrifying, nightmarish world of zombie slaves, while the next will send you soaring above a river with a water fairy, with the next making you cross-eyed as you try to follow the time-traveling shenanigans of a bored married couple.  There’s even a story about randomly-sprouting appendages…. Ultimately, Kontakt introduces English readers to some of the best Croatian SF out there, and it’ll make you take to the internet to look for more. And while there isn’t much Croatian SFT available now, hopefully there will be more in the future as American SF magazines and presses continue to publish more stories and novels from around the globe. After all, every single story was translated by its respective author, so the chances of seeing more Croatian SFT seem good.

I enjoyed most of these stories, but a few in particular were exceptional: Žiljak’s “The Dead,” Vlahović’s “Every Time We Say Goodbye,” Konvični’s “Time Enough and Space,” and Krušvar’s absolutely chilling “The Executor.”

“The Dead,” a story about zombie enslavement that channels first-hand accounts of concentration camps, is remarkable not for an original plot or literary style, but rather for its startling and horrifying replacement of humans with zombies. This idea that the dead could be partially resurrected, just enough to do drudge work and receive vicious treatment, suggests that even death won’t bring an end to suffering, but instead open up a new avenue for it. Žiljak’s narrator maintains a voice that is free of emotion or judgment, which, ironically, makes the story that much more powerful. Like the zombies themselves, who are resurrected by a sorcerer and driven by merciless guards, the narrator tells us the story in its sparest form. Inserted here and there are portions of an interview with someone from Zombietech, Ltd., who explains that their zombie technologies “combine the ancient wisdom of Haitian voodoo sorcerers with the latest biological research.” Zombification doesn’t spread like a virus, according to this representative, but is chemically induced after death (or so they stress). When one of the zombies starts questioning his own existence and experiencing emotions…well, I won’t spoil it for you.

An interesting twist on war and the homefront, “Every Time We Say Goodbye” gives us two worlds functioning at different temporal speeds. In one world, people live in peace and comfort. In the other, the soldiers tasked with protecting those people are regularly sent off on hellish missions to fight the (never described) enemy. The women and children who also inhabit this latter world are there to give the soldiers a reason to keep fighting. Whenever a soldier dies, his wife and family are allowed to return to the peaceful world and live out their lives without the domestic violence and terrifying mood-swings that return with the soldiers when they’re on leave. I was intrigued by Vlahović’s use of time to describe how a society might almost completely sever the connection between itself and the soldiers who are to protect it, while drawing on the emotional strength of ideals like honor, love of country, and hatred of the enemy to keep those human soldiers going. It’s a depressing but thoughtful and nuanced take on the destruction warfare wreaks on soldiers and their families.

Konvični’s “Time Enough and Space” reeled me in because of its whimsical approach to physics and space travel. When the residents of a jam-packed Zagreb start buying “space” from a strange salesman, they start to create entirely new communities that stretch “beyond” the city’s physical constraints. Eventually, they branch out to and create other worlds. All of this was necessary, of course, after the world powers attacked one another with nukes and devastated most of the planet, leaving refugees to stream into Croatia and a few other countries. Konvični’s story offers an interesting alternative timeline with a playful approach to the physics of space.

“The Executor,” though. That story is like a punch in the face. Told from the perspective of Cedrick, “a soldier in the army of the Almighty, the Executor of the God’s Intent,” this story takes up the nature of good and evil and mixes it with aliens. When Cedric comes to a village to investigate claims that a witch is terrorizing the people and killing sheep, he discovers that the terror is coming from a massive spider-like life form born from a woman and an alien (a “creature of light”). The Executor as narrator constantly directs his words to God, even as he gets drunk, molests a dead woman, and then goes on an abominable killing spree, only to be stopped by one courageous girl and the very creature who brought him to that village. Disturbing yet riveting, Krušvar’s story brings the anthology to a powerful close.

As I said, I hope we see much more from these and other Croatian SF writers. Be sure to check out Kontakt and tell me which stories you enjoyed the most.