REVIEW: A Planet for Rent by Yoss 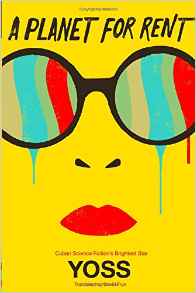 If you’ve been wondering what kind of science fiction is coming out of Cuba these days, wonder no longer. That’s because A Planet For Rent, the English-language debut of Cuban sci-fi writer Yoss (a.k.a. José Miguel Sánchez Gómez) is just the first in a series by Restless Books featuring exciting stories emerging from that island. And Yoss doesn’t disappoint, sling-shotting us around the world and the galaxy, and asking us to imagine what it would be like if several powerful alien species decided to colonize and degrade Planet Earth.

And even though A Planet for Rent is called a “novel,” it reads more like a series of striking, detailed vignettes, each focusing on a different aspect of post-Contact human society and its struggle against the alien overlords. For instance, we meet a “social worker” (prostitute) and learn that she’s attracted an alien client who has promised to take her away from Earth and give her a life of wealth and ease…that is, until it’s time for the alien to plant its eggs in her womb and…well… We meet Moy, a performance artist living on Tau Ceti, supported by his patron (a Colossaur nicknamed “Ettubrute”). With each performance, Moy literally dismembers himself (using vicious-sounding instruments) in front of a live audience, with special injections to keep him conscious so that he can lecture about Art and The Artist until his vocal chords are cut. Moy is then cloned and “reanimated” so that he can do the whole thing all over again.

We witness a grueling, desperate game of Voxl between Team Earth and an alien team, with the former counting on a win to help bring back a shred of dignity for their planet. Because it’s come down to that: Earth is now a tourist destination for the other alien species, a place where they can step into “Body Spares” and explore the exotic planet in human form but with their own consciousness; a place where any human who wants a better life does almost anything to escape. The number of homemade space ships that make a run for it is so high that Planetary Security has devised a complex strategy for eliminating almost every would-be escapee.

It isn’t hard to see the connections Yoss is making between a planet oppressed by alien overlords interested only in profit and power, and a country struggling against economic and environmental problems, with its people seeing flight as one of the only avenues for a better life. Near the end of the book, an unnamed narrator directly connects what the aliens are doing to Earth with what England did to India in the 19th and 20th centuries, illustrating the futility of humans simply wishing for a change instead of making the change themselves:

…Queen Elizabeth II only sent her last viceroy, Lord Louis Mountbatten, to give the subcontinent its independence when she could no longer control it. When neither the Englishmen nor their sepoys could continue to lord over millions of people. So long as the xenoid [alien] Englishmen and their Planetary Tourism Agency sepoys continue to control Earth, there will be no independence. Nobody gives away the goose that lays the golden eggs until he’s forced to.

And while this kaleidoscopic work introduces us to several interesting alien species and planets, the human point of view dominates its pages. Yoss drops us directly into the shoes of the drug-addicts, prostitutes, artists, criminals, and athletes, asking us to consider just how we would react if their fates were ours.

I did wish that the characters were more connected across these vignettes so that we could learn more about their relationships and pasts. That probably would have made this a longer book, though, and changed our impression of it as a series of fast-moving slides in a crash-course on neo-colonialism.

Ultimately, it all comes down to the question “What fate awaits a race that has lost faith in the future, idolizes the past, and puts up with the present?” Time and again in A Planet for Rent, characters strive to improve their lives, only to be beaten back at the threshold of victory. And yet, humanity’s resilience continues, and we as readers get the sense that something will change (it has to) when the oppressed rise up against the oppressors. Yoss has written a work of science fiction that speaks to fundamental problems humans deal with every day. This is not just a story about alien oppression; it’s the story of our own planet’s history and a call for change.