REVIEW: The Rabbit Back Literature Society by Pasi Ilmari Jääskeläinen 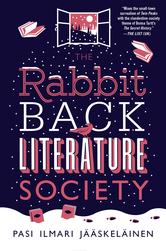 I must admit, I was hoping that the mysterious woman at the heart of this novel turned out to be a dimension-shifting alien robot.

And who knows, she might have been. But I’m jumping ahead of myself. I’ve never read anything quite like RBLS, the first of Finnish writer Pasi Ilmari Jääskeläinen’s novels to be translated into English. It is at once a mystery, a work of magical realism, a work of fantasy, and a meta-fictional meditation on what it means to read, write, and tell stories.

Ella Milana, the central character, is trapped in a life of uncertainty and bitterness. She’s been hired to be a substitute language and literature teacher in the town of Rabbit Back, where she grew up. Her return to the town is more bitter than sweet, since her father is slipping away as dementia takes over, and she has recently left a long-term relationship behind because she found out that she has “defective ovaries” (apparently her boyfriend/fiance wanted kids that she couldn’t have).

Quickly enough, strange things start happening that call Ella’s attention to the (in)famous Rabbit Back Literature Society, formed by a world-famous children’s writer named Laura White. The Society has only nine members, not including Laura, and they were all handpicked by her while they were still children. The goal was to turn them all into great writers. Ultimately, they did become (mostly) successful writers, but their intense, insular relationships with one another over the years gradually pulled them apart.

Before Ella learns all of this, though, she first encounters a bizarre book virus. You read that right. Apparently, the virus can jump from one book to another, provided they’re touching, and rearranges words, paragraphs, and even plots, until a novel like Crime and Punishment becomes nearly unrecognizable. Then, Ella is invited to become the tenth member of the Society (supposedly because of a story she published in the local newspaper), but at her inaugural celebration, Laura White disappears in front of her guests in a blast of snow.

To add to these mysteries, Ella begins digging into the Society’s past, with plans to write a paper or book about it. The only way to get the information she wants is to play “The Game,” a sometimes-dangerous method by which the members can get each other to tell them secrets and suppressed memories. When Ella finds out that there was once another tenth member who died mysteriously and whose existence has been hushed up, she becomes even more adamant about finding the truth.

The key to all of these mysteries is Laura herself. When she was a child, she fell through a frozen pond and was technically dead for a while, before being successfully revived. Miraculously, she returns to Rabbit Back after rehabilitation, seemingly recovered, but there’s something strange about her. Sometimes she’s almost transparent. Her children’s stories are so captivating that people the world over are obsessed with them. Her presence is disturbing, regal, and somewhat otherworldly. And her bizarre disappearance suggests that maybe she never actually came back from the dead. Was she some sort of supernatural being? The town’s collective creation? A species of “undead”? We’ll never be sure.

Ultimately, Jääskeläinen asks us to think about how fiction is created and the ways in which we use our own and other people’s lives as fodder for our stories. Everyone in the novel is engaged in some form of storytelling, whether it’s building their own personal narratives, writing novels, writing academic papers, publishing a newspaper, or dredging up forgotten memories. Ella’s father, whose dimentia has robbed him of the ability to know his own narrative, dies early on in the book, unable to function as a part of this insular, fiction-spinning community.

So lots of tasty questions and mysteries, no real satisfying answers, and an addictive plot which is, I guess, only to be expected.