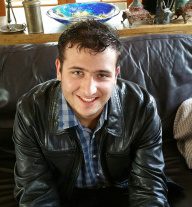 Writer, editor, and producer Jeremy Szal has written numerous stories, reviews, and articles for such publications as Nature: Physics, Abyss & Apex, Grimdark Magazine, Lightspeed, Strange Horizons, and others. He is the fiction editor and audio producer for the Hugo-winning podcast StarShipSofa and launched the podcast’s first “Translations Month special.” I asked him for his thoughts on the state of SF in translation and the ways in which readers/reviews/bloggers can promote it.

Rachel Cordasco: What was the catalyst for this month of translated sf on StarShipSofa?

Jeremy Szal: Back in January I was in Poland for a holiday. We were visiting the town that my father grew up in. Near the town square was a colossal two-storey bookstore with a massive SF/F section. Naturally, I made a beeline for it. There were a number of familiar titles, translated into Polish from English, but what really caught my attention were the rows of Polish SF/F – novels and authors I’d never heard of before. I started browsing through them – the cover art was phenomenal and sold me immediately, even though I couldn’t understand a word. I asked my father to translate the blurbs. Spacepunk, epic Russian-style fantasy, steampunk military SF, genetically modified humans living in a city built inside a mammoth asteroid, to name but a few. It was exactly what I was after.

And then it hit me: I’d never get to read them. Entire bookshelves of epics and I’d never be able to experience them. And the authors would never get them to my hands. The language barrier stopped us both dead in our tracks. I would have been willing to buy them all, but I had to walk away.

And then I realised I had the perfect opportunity to get non-English work into the ears of tens of thousands of people who’d never hear of them otherwise. I could help break down that barrier.

RC: In explaining why you’re devoting a month to these stories, you explain that “with English-speaking (particularly American) stories dominating the market …it can be quite difficult to get work translated from another language into English to reach a wider audience, and even harder to find them once they have…” How do you think that podcasters, bloggers, and reviewers can work toward reversing this trend?

JS: To clarify: there’s absolutely nothing wrong with only reading English work, nor will there ever be. People can read whatever they want to read; there’s enough room in the genre that any act of exclusion is unnecessary.

However, if you do want to support translated fiction and learn about other cultures and languages (as one should), there’s only one way to do that. When a publisher gives us non-English work by Alexey Pehov, Dmitry Glukhovsky and Cixin Liu: go out and buy them. Vote with your wallets. Convince other people to buy them. Review them on Amazon, recommend them to your book club. Write into the publishers, tell them you want more, ask them to translate other works Give something to show for it.

The heads of big publishers speak one language. It’s not in retweets, it’s in sales and dollars. The ground-breaking success of The Witcher video game series, based on Andrzej Sapkowski’s work, has torn a huge chunk of that barrier way, but there’s still work to be done. If a publisher sees a translated piece sells poorly, it could affect their decision to translate the next book and both the author and the potential audience will lose out.

RC:  How did you choose these stories by Chen Qiufan, Laurent Queyssi‏, Pavel Amnuel, and Taiyo Fuji? Were there others that you were really hoping to air?

JS: The stories by Laurent Queyssi‏ and  Pavel Amnuel were picked directly out of the slush pile. I had other translated submissions as well, but they didn’t win me over in the end. Regardless if it’s translated or not, the story needs to meet a standard. You won’t be doing either the author or audience the favour, especially when there’s limited room.

Amnuel’s story (which was also reprinted in the Years Best SF, edited by Gardner Dozios) about metaphysics and parrell-paradoxes seized my attention immediately. And Queyssi’s trangressive A Clockwork Orange-esque tale about a dystopian future of product-placement and violence hooked into my gut and wouldn’t let go until the very end. It was an easy acceptance.

As for Chen Qiufan and Taiyo Fuji, those were both solicited directly. There were a hundred other stories I could have taken – I’d love to get the Strugatsky’s incredible “The Gigantic Fluctuation”, or something from Andrzej Sapkowski. It’d be fantastic to get a story published in an African language. I’m currently eyeing the Middle East – there are a number of stories from Turkey available online. I’m hoping to get even more translated stories via submissions (hint, hint!) in the future.

RC: Does StarShipSofa plan on doing more such Translations Months?

JS: There’s nothing planned yet, but I’d be very surprised if us, or our sister podcasts Far Fetched Fables and Tales to Terrify didn’t jump on it again – I’d certainly love to. We’ve had such an overwhelmingly positive response to Translations Month that there’s really no reason not to. We’d especially love to pay our authors for their stories, and if you’d like to help us do that (as well as help with our server costs), our Patreon jar is over here.

But otherwise, please do come along and check out Translations Month – you’ll give these authors an audience and expand your horizons at the same time.

Thanks so much to Jeremy for this interview!