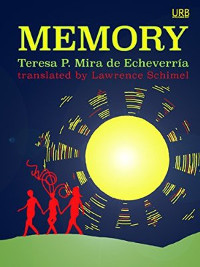 There are so many reasons why I love this novelette, but the main one is that Argentine author Teresa P. Mira de Echeverría subverts expectations so gracefully and expertly (and this comes through clearly in Lawrence Schimel’s translation from the Spanish). Originally published in Terra Nova: An Anthology of Contemporary Spanish Science Fiction, Memory functions well as a free-standing novelette, raising numerous tantalizing questions and ideas in the reader’s brain without offering much closure.

And while Memory is labeled “science fiction” because of its Martian setting, genetically-engineered characters, and discussions of terraforming (and its reverse!), it is ultimately a book about love that transcends genre. Here we have the story of a human boy (Jedediah) who is drawn to a Martian “native” (Ajax)- one of the genetically-engineered humans sent to Mars hundreds of years before to terraform the planet. These natives are ostracized by the humans living on Mars, and they live in their own peripheral communities.

Jedediah grows up determined to leave his neglectful father and join Ajax to work with him on returning Mars to its pre-terraformed state. Ultimately, Jedediah and Ajax acknowledge their mutual love and commit themselves to one another for life. Mars, though, is not Earth, and its inhabitants are not bound by traditional human beliefs about marriage and binary relationships. Rather, this new civilization forged by native-human relationships is all about multiplicity and generosity. Many of the family units contain three, four, and even five members who have committed themselves to one another. The children that they have are raised by the entire unit.

What makes this story especially compelling is Ajax’s ability to see his memories of the future: as he explains to Jedediah, “One part of my memory works forwards…Glimmerings of you have always accompanied me.” Memory, for Ajax, then, is not simply a calling-up of the past, but also a way to choose a specific future, one that includes a beloved partner. In this way, memory is an active thing: the natives can choose certain paths based on a preferred future, just as they can reverse the terraforming process that they themselves initiated hundreds of years before. A memory of Mars as it once was informs their drive to take it back from Earth, even though the natives themselves came from Earth, too.

In many ways, Memory reminds me of Bradbury’s The Martian Chronicles in terms of the latter’s use of Mars as a kind of exotic backdrop to the human drama that plays itself out. De Echeverria, like Bradbury, is interested less in the science of Mars and more in what it means for humans to colonize and change another planet- what does this do to humans’ perceptions, beliefs, and desires? How does a radically different environment change how we think about what it means to be human?

Most interesting of all, to me, is how much Memory makes me think about a famous novella (Death in Venice) by my favorite author of all time (the German writer Thomas Mann). Mann’s story, too, explores desire and “unconventional” love and its connections to art, memory, and death. Unlike Memory, though, Death in Venice despairs for a world in which love isn’t policed and bounded. De Echeverria’s story, in its lyrical and ultimately positive portrayal of non-binary, expansive love, seems like the answer to Death in Venice‘s question.

Memory would work wonderfully expanded into a full-length novel, since it seems so compressed in its current form (jumping ahead over years, etc.). Nonetheless, de Echeverría offers us a unique vision of human evolution- both biological and social- and she does this with lyricism and grace.