REVIEW: A Legend of the Future by Agustín de Rojas 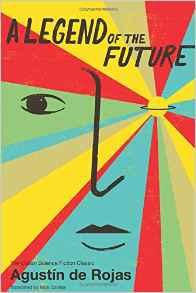 Considered the “patron saint of Cuban science fiction,” Agustín de Rojas authored a trilogy that pushes the boundaries of our imaginations. Thanks to Restless Books, Espiral (Spiral, 1982), Una leyenda del future (A Legend of the Future, 1985), and El año 200 (The Year 200, 1990) will finally be available to English-language readers. Thanks also go to Nick Caistor for his ability to bring de Rojas’s words to life in English.

You’ll want to prepare yourself for Legend. It’s been compared to Clarke’s 2001, and like that remarkable text, de Rojas’s will blow your mind in a good way. And yet, Legend is not at all like 2001 in so many other ways. When the novel opens, we’re thrown into what ultimately turns out to be (partly) the crew commander’s dream- but we don’t know this for a while. The boundaries between dream and reality, and then between human and machine, almost melt away as the story progresses. And it is de Rojas’s skillful manipulation of those boundaries that makes Legend so addictive.

The novel begins with a dream and a catastrophic accident, and then switches to the “reality” of the story: that is that, at some unknown time in the future, a spacecraft on its way to Titan (one of Saturn’s moons) is damaged by a meteorite, and several of the crew members have been killed. Only three are left: Gema, Thondup, and Isanusi (who was severely injured in the accident). With multiple system malfunctions, including a broken navigational computer, the ship Sviatagor won’t be able to make it back to Earth. The thing is, the most important part of the mission is that the ship, no matter the condition or even if it made it to its destination, must return to Earth at all costs. Only then will scientists be able to learn from the journey and make adjustments for the next one.

With radiation poisoning eating away at Gema and Thondup, and Isanusi in a stasis pod where Gema can monitor his vitals, the remaining crewmembers agree that they must sacrifice themselves in order to bring the ship back home. While Thondup and Gema make as many repairs as they can, Gema also works on transferring Isanusi’s consciousness into the navigational computer, so that he can ultimately guide the ship back to Earth. In the meantime, Thondup must take psycho-stabilizer pills to keep his sanity, while Gema struggles to merge the two personalities that inhabit her own mind.

The line between reality and memory begins to break down at this point, as de Rojas switches back and forth without warning between Gema’s memories of mission training and bonding with her crewmates, and the present catastrophe. It’s difficult to tell, at times, which part of the story is which, inviting the reader to feel what Gema must feel. De Rojas draws us into the characters’ lives in this way to make us honestly think about what we would do if faced with such a situation. Would we struggle to survive no matter what? Would we sacrifice ourselves for the greater good of space exploration and human survival?

Admittedly, I found it difficult to get in to the story at first, since I was so confused about where the characters were and what was happening to them. Gradually, I understood the lay of the land, so to speak, and was able to start appreciating de Rojas’s masterful exploration of psychological stress and the threshold between human and machine. I look forward to reading Spiral and The Year 200, and you should, too.