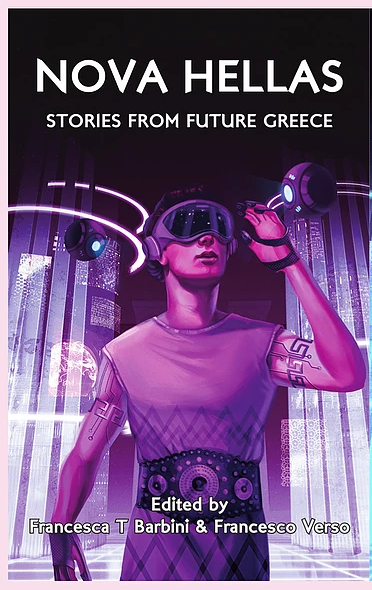 all stories originally written in Greek were translated by Dimitra Nikolaidou and Vaya Pseftaki, except for the last story, which was translated by Stephanie Polakis

First of all, just look at that beautiful cover. It serves as a visually-pleasing entrance to equally-inviting stories, which cover topics ranging from android rights and immigration, to tourism and genetic engineering, to the development of virtual reality technology.

And while few anthologies ever capture a reader with every single story, every one in Nova Hellas was a treat for me. My favorites were, in fact, two of the pieces originally written in English: “Those We Serve” and “Any Old Disease” simply because they take on topics I find especially fascinating–the inner life of androids built to serve humans and far-future attempts to understand our current time. “Those We Serve” takes place in a future Greece where “real” humans have retreated beneath the surface and android replicas have replaced them on land. In this story, the android Manoli works at a resort with other androids, and while they know that they are artificial, they still carry the memories of their human counterparts; however, they mustn’t let the tourists know that they are androids. They also have special spines that direct their every move. Eventually, human Manoli makes an appearance and threatens the world that the androids have sustained for so many summers…

“Any Old Disease” reminds me of Elisabeth Vonarburg’s novel In the Mothers’ Land (tr Jane Brierley) in that both imagine far-future societies that are trying to piece together the past based on limited information. Here, a strange and rare disease called the “Leak” makes people waste away and die, and doctors and researches (who quarantine the afflicted in a research facility on a mountaintop in Greece) can’t find a way to stop it. Eventually, we learn that most people in this world are eternal, and death itself is almost impossible to comprehend.

Issues surrounding tourism and immigration come up frequently, especially in “The Human(c)ity of Athens,” “Roseweed,” and the abovementioned “Those We Serve.” “The Human(c)ity” imagines a world in which all people are relocated to certain cities to work in industries best suited to their abilities. Families are broken up and people feel rootless, never knowing where or when they might be shifted across the continent or the planet. In “Roseweed,” a deep-sea diver inspects underwater buildings to ascertain their sturdiness. Her company caters to tourists who love to feel like they’re going on a dangerous adventure, so her boss starts changing her official reports- the sturdy buildings are now classified as “high-risk” in order to attract more customers.

In several of these stories, the world literally looks very different from the one we know now: massive floods have buried cities under water, color has disappeared, androids have become commonplace. Ever-present, though, are the streets of Athens, the Acropolis, the Agora, and much more that makes this a distinctly Greek collection.

This anthology is the first of its kind and a must-read for anyone who loves science fiction. I hope for many more works of Greek SFT in the future!