Flash Fiction From Around the World: “Writing Software”

This is the tenth in a series of posts featuring speculative flash fiction in translation. This series highlights both new and established spec fic writers from around the world. 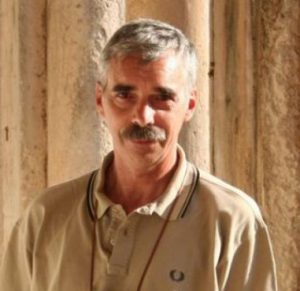 Piero Schiavo Campo has a degree in physics. After five years in scientific research, he moved on to software. Currently he teaches Theory and Techniques of New Media (the Internet and its media-related services) at Università degli Studi, Milano Bicocca. On this topic he has recently published the essay “I media nella tela del ragno” (“The Media in the Spider’s Web”). As an SF writer, he has authored various novels and short stories, and has won the prestigious Urania Award twice (2013, 2017) and the Robot Award (2017).

Born in London to British parents, and raised bilingual in Italy, Sarah Jane Webb grew up in a house full of books. From her family, she inherited a passion for reading and writing. After studying modern languages, she worked for years in multinational companies in London and Milan. After the birth of her two children, she obtained a TEFL certificate for teaching English and started teaching and translating commercial literature. Over time, translation became her full-time occupation and she specializes in creative and literary work.

I use writing software.

I was born in Llanelwy.

My father was a shepherd.

No-one in my family speaks English.

I went to Llanelwy elementary school.

My teacher said I was very bright.

My teacher only spoke Welsh.

My father died when I was in year two at Llanelwy elementary.

I remember he drank a lot of wine.

I remember he beat up my mother.

I had to leave school when my father died.

My mother didn’t have any money.

We moved to the city.

My mother worked as a house cleaner.

I was hired by a computer company.

I cleaned the fitted carpet and the toilets.

I worked at night.

There were lots of corridors.

There were white lights.

There was the humming of machines.

He said he didn’t understand me when I spoke.

He was very intelligent.

He wrote programs for artificial intelligence.

I wanted to understand what he did.

He said I learned quickly.

He said it was a pity.

He gave me a book.

I tried to read it.

I couldn’t remember how to read.

John explained what I didn’t understand.

I told him I wanted to write a program.

He laughed at first.

I explained what I wanted to do.

I explained that it’s bad when you can’t talk.

I explained that it’s bad when you can’t understand.

I told him I had to code concepts.

I told him how to code concepts.

I wanted a program to help me write.

John thought about it.

We met at night.

I told him how to code concepts.

John said we would be rich.

I wrote with our program.

John had a bad accident.

An accident with his car.

I wanted a copy of the program.

I used my keys.

It was night time.

The boss was there.

He saw me take the program.

My mother wanted to beat me up.

She said I lost my job.

She said I was stupid.

I slept at the station.

The station was very cold.

He talked a lot.

He said it wasn’t fair.

He said the rich had everything.

I was very hungry.

I didn’t want to do it, but I was hungry.

The owner of the shop shouted.

He hit the owner of the shop.

I know he didn’t mean to hit him.

The owner of the shop wouldn’t shut up.

The owner of the shop cried out.

He cried out at every blow.

In the end he shut up.

Then another man came in.

At the station our friends didn’t want us there.

The police found us.

The police beat us up.

He shouted that he didn’t mean to hurt that man.

We were pushed into the car.

We were taken to prison.

My mother knows nothing about me.

The director is very kind.

He doesn’t understand when I speak.

I asked for a computer.

The director said I can’t use the computer.

I knew there was a computer.

I have found the computer.

I have just found the computer.

The policemen are coming.

The policemen will beat me up again.