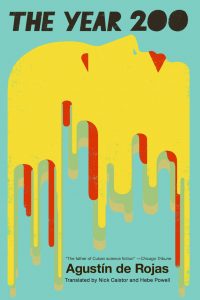 The Year 200 has been compared to Invasion of the Body Snatchers, and rightly so, but de Rojas takes the idea of “body snatching” to an entirely new level.

Let me explain. The people of Earth are living under the Communist Federation, which soundly defeated the capitalist Empire centuries before. Not everything is flowers and unicorns, though. Despite the sophisticated technological advancements (artificial intelligence network, holographic imaging devices, etc.) and relative stability and prosperity, a small portion of the population remains unsatisfied. Communism has triumphed and (almost) everybody knows their place, but those who remain on the fringes have the option of going off the grid to become “primitives” or going to the other extreme and becoming “cybos” (enhancing their brains with cybernetic implants).

Enter the callous and crafty Empire spies who had been hiding out during all of those centuries, just waiting to spring back to life and retake the planet. Their consciousnesses were stowed away in “Hydras” (robotic capsules) buried deep beneath the surface. Now that the machines have received the correct signal, they’ve emerged to inject unsuspecting people with the Empire spies’ consciousnesses. After this, it’s just a simple case of stretching some mental muscles and getting down to work fixing up what they assume has become a dysfunctional, tottering world:

They had been convinced that once the Empire had disappeared, the Federation, having lost the external reason for its existence, would disintegrate into a hundred small states. But the nationalists had not behaved as expected. More seriously still, the assumption as to the basic constancy of the human personality had also been a mistake…the communist theorists had been right. It had proved possible to alter–and alter significantly–the composition of personal values, the very focus of the meaning of life.

But whatever, the spies have a job to do, so they set about undermining the Federation by working to reverse what they see as the current sheep-mentality. Thus begins an increasingly-confusing mission (ok maybe just confusing to me), in which spies jump across various bodies in an effort to outwit double-crossers and the Federation psychosociologists. It ultimately comes down to one brilliant woman and a cybo to stop the Empire infiltration and uncover a pretty evil plan by one man to disperse his consciousness throughout time and space to become like a god. You read that right.

Throughout the narrative, de Rojas has inserted “questionnaires” that ask us to stop and consider the part of the story that we’ve just read- in essence, refusing to let us forget that what we are reading is fiction. De Rojas wants to create a hyperaware reader, one who doesn’t accept his story as a kind of entertainment but as a lesson and food for thought. At the end, the author confronts us with some hard questions about what it means to be a rational human and a progressive society:

Suppose that you have decided to dedicate a book to them [the “fearful,” the “cowards”]. A book written with pain, with bitterness, with sadness for them but at the same time bursting with the conviction that human beings can grow, that they can overcome fear (not by means of chemicals, no, but through their willpower, their own mettle to go on to forge a society that obliges itself to evolve, to perfect itself such that however great the fear, then humanity is always greater) and fulfill themselves, becoming entirely worthwhile!

Keep in mind that The Year 200 was written in 1990, after the Berlin Wall came down and before Cuba’s painful “Special Period.” For de Rojas, questions of Utilitarianism, state power, and human nature were crucial in helping us understand the transformations going on around us at the time. It was an era of cataclysmic change- one that we are still working through today. De Rojas shows us that these questions will never become irrelevant.

The Year 200 is the third in de Rojas’s canonical sci-fi trilogy. The first, Spiral (1982), is coming out soon from Restless Books. You can read my review of the second book, A Legend of the Future, here.