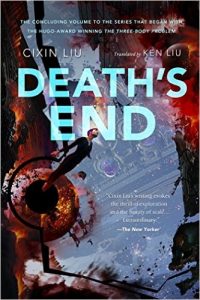 This giveaway of one hardcover copy of Death’s End is open to residents of the US and Canada only.  To enter, comment on this post and include your email address.  The giveaway ends on Saturday, July 30, and the winner will be contacted shortly afterwards. Good luck!

“With The Three-Body Problem, English-speaking readers got their first chance to experience the multiple-award-winning and bestselling Three-Body Trilogy by China’s most beloved science fiction author, Cixin Liu. More than two million copies of the trilogy – which includes The Three-Body Problem, The Dark Forest, and now Death’s End – have been sold in China and Cixin Liu has won China’s most prestigious science fiction award a total of nine times.

The Three-Body Problem was released in English by Tor Books in 2014 to great acclaim…It won the Hugo Award and was nominated for the Nebula and Locus Awards. Ken Liu, the translator of both The Three-Body Problem and Death’s End, has recently become a meteoric success in the world of short science fiction. In 2012, his story “The Paper Menagerie” was the first work of fiction, of any length, ever to have swept the Nebula, Hugo, and World Fantasy Awards in one year.”