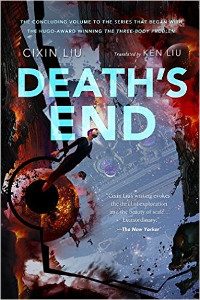 series: Remembrance of Earth’s Past (Book 3)

The Three-Body Problem drew me completely into the universe Cixin Liu created, in which humanity had to come to terms for the first time in history with the existence of an alien species. The Dark Forest absorbed me in its nuanced, fascinating discussion of the nature of the universe and the potential intelligent life within it. So you can imagine how much I was looking forward to the last novel in the trilogy, Death’s End.

Let’s just say, I was not disappointed.

Not only does this last installment take the series to a whole new level; it raises even more important questions about humanity’s ultimate survival, the potential realities of the Dark Forest that is our universe, and the limits of technology. Liu doesn’t hesitate to launch into complex discussions of scientific theories and macro-level debates about how humans should approach encounters with hostile alien intelligences. He even puts us in the mind of an alien who’s job it is to “cleanse” the universe of worlds deemed potentially threatening.

Death’s End is not just one book, though, but two: the frame, which is interspersed throughout the book and called “A Past Outside of Time;” and the story proper, in whcih we follow the remarkable journey of Cheng Xin toward the limits of the universe. The frame story, supposedly written by Cheng herself, is formal in tone, suggesting an academic paper akin to something that Cheng might have written as a student. This intermingling of stories (one by Cheng, the other about her), invites the reader to view the entire tale from a doubled perspective, in which we are always aware of perspectives outside of our own. In the world of this trilogy, humanity lives with the knowledge that it isn’t alone in the universe for centuries before actually encountering a representative of Trisolaris (Sophon).

Recalling Arthur C. Clarke’s sweeping timeline for humanity in 2001: A Space Odyssey, Death’s End takes us from the “Common Era” (to 201 CE) through the “Crisis Era” (201-2208) and far beyond, ultimately to a “Timeline for Universe 647: 18906416-….” In between, we witness humanity’s struggle to stay one step ahead of the Trisolarans and other potential threats- launching a human brain toward the Trisolaran fleet in the hopes that it can serve as a spy for humanity; constructing massive space-cities that can hide behind Jupiter, Neptune, and Saturn in case aliens decide to destroy the Sun, etc. Cheng Xin is both a witness and a driving force behind the events of the novel, filling the role Luo Ji played in The Dark Forest.

Death’s End never lets the reader’s mind rest, constantly urging us to think outside of our comfort zone. One of the most brain-twisty elements of the story is its focus on shifting dimensions and the fabric of the universe. We’re shown what a four-dimensional universe might look like, and then what happens when it collapses into three dimensions, and then into two dimensions. If you’re not used to thinking in these terms, you might need to reread some sections to understand them, but it’s worth the time.

As with the translation of The Three-Body Problem, Ken Liu brings Cixin Liu’s story to life for those of us who cannot read the original Chinese. Translating from Chinese into English is a complicated process itself, but making the scientific and theoretical elements understandable to a layperson like myself is even more impressive. On every page, Ken Liu’s careful, nuanced, and elegant translation allows us to admire and wonder at the mind that can conceive of such a story about humanity’s fate and its place in the universe.

Even while I was nearing the end of the book, I knew that I’d have to circle back and read the series again, just in order to wrap my mind around Cixin Liu’s conceptualization of humanity’s future. This trilogy is sweeping and brilliant, and it forces us to reconsider if we really should be blasting out a greeting to space, calling all potential alien species to check out Earth. Do we really want to expose ourselves to the unknowable, the unfathomable? Are we really so arrogant as to think that we might be able to hold our own in a fight against a superior intelligence? These are questions we need to think seriously about.

No one should be surprised that this series has won awards both in China and the U.S. And it is only right that Cixin Liu’s work has increased American readers’ interest in Chinese science fiction. I look forward to reading more from writers like Cixin Liu, Chen Qiufan, and Hao Jingfang, thanks to Ken Liu and fellow translators.

Bottom line? Read all three books in this trilogy because you need them in your life and in your brain. Period.