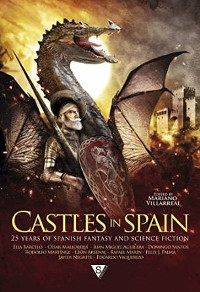 If you’ve been living your life thinking that you’ve already read some of the best speculative fiction out there, but you haven’t read any of the stories in this collection, then you’re just plain wrong. The stories in Castles in Spain are not just some of the best to come out of Spain’s “Golden Age of fantastic literature;” they are some of the best in the genre, period, stop, end of sentence.

Thanks to Sportula and a talented team of translators led by Sue Burke, we English-language readers can finally experience the diversity and artistry of this collection:

“The Star” by Elia Barceló, translated by Nur-Huda el Masri

“The Flock” by César Mallorquí, translated by Marian and James Womack

“The Forest of Ice” by Juan Miguel Aguilera, translated by Gwyneth Box

“My Wife, My Daughter” by Domingo Santos, translated by Lawrence Schimel

“In the Martian Forges” by León Arsenal, translated by L. Finch

“A Marble in the Palm” by Rafael Marín, translated by Charlie Sangster

“The Secret Hunting” by Javier Negrete, translated by the author

“Victim and Executioner” by Eduardo Vaquerizo, translated by Sue Burke

From sentient AI satellites to Martian colonies, and from clones to aliens, Castles in Spain asks us to consider a wide range of thought-provoking alternate realities. What would happen if human cloning was accessible to anyone who could pay? How can we be sure that we’re not killing intelligent life forms when we can’t even recognize them? What might happen if humans were wiped out and all that was left were machines and animals? These are just a few of the questions raised by these award-winning, anthologized stories.

While it’s difficult for me to pick favorites from this collection, I do have to single out “The Flock” (1993) and “My Wife, My Daughter” (1997)- outstanding stories that made me smack myself for not having learned Spanish so I could have read these earlier in my life.

The plot of “The Flock” is pretty straightforward: humans have finally wiped themselves out, and all that’s left are the machines and the animals. What sets this story apart is that the narrative point of view has been given to a sheep-herding dog named Broom, and, to a lesser extent, an AI satellite called Geosat. Both must figure out how to carry out their duties in the absence of human direction and control, and both ultimately sacrifice themselves in order to fulfill the imperatives that have been bred/programmed into them. Mallorquí writes with such quiet grace and style that you forget you’re reading at all.

And then there’s the deeply disturbing “My Wife, My Daughter,” a story of love, loss, and clones. When Sergio Hofenback loses his wife to cancer after just six years of marriage, he decides that cloning her is preferable to living without her. Thing is, he’ll have to raise the clone as his daughter until she’s old enough to be his…wife? again? Like I said, disturbing. But are we so far away from a world in which this could happen? Nope.

I’ll stop here so you can go and grab yourself a copy of Castles in Spain. You’ll thank me.