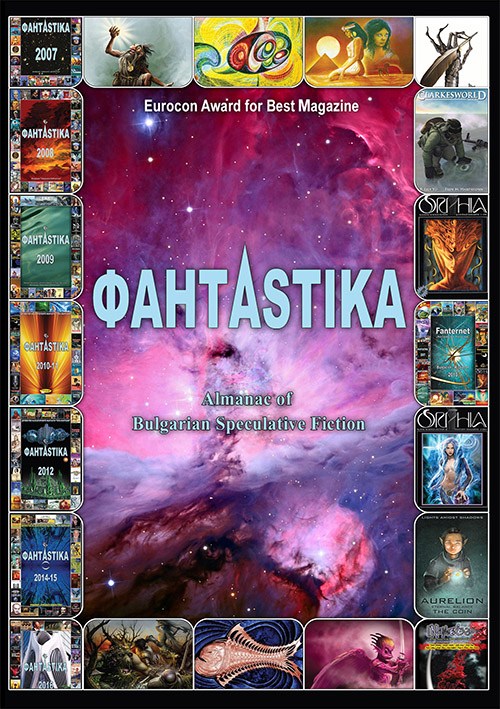 Read more about this remarkable anthology of Bulgarian speculative stories and art here.

The blurb: “ФантАstika: Almanac of Bulgarian Speculative Fiction collects short fiction and novel excerpts originally written between 1978 and 2020 by twenty-four Bulgarian authors. Most of the short fiction has been reprinted from professional magazines or anthologies, such as Oceans of the Mind, Unstuck, Diamonds in the Sky, Future Science Fiction Digest, and others. The almanac also contains about a hundred pages of full-color paintings and black-and-white drawings by over a dozen Bulgarian artists. ФантАstika is a dream come true—both for Atanas P. Slavov and the members of Terra Fantasia Association of Bulgarian SF & F Writers and Artists, who have dedicated half a century to the promotion of speculative fiction in Bulgaria and around the world, and for Kalin M. Nenov and the Human Library Foundation, who have translated human-evolving fiction into English for the past fifteen years. In an age when we need ever more bridges across the world and to the future, ФантАstika comes to offer you some. Will you walk them?”

This remarkable anthology of Bulgarian speculative fiction and art demonstrates once more just how international this genre really is. ФантАstika is, itself, an award-winning speculative fiction magazine, and the anthology that bears its name includes accomplished Bulgarian authors such as Zdravka Evtimova, Lyubomir P. Nikolov, and Valentin D. Ivanov. Translated lovingly by Kalin M. Nenov along with several others (including some of the authors themselves), several of these stories have appeared in English-language publications like Oceans of the Mind and Future Science Fiction Digest.

There really is nothing like reading an anthology filled with unfamiliar authors, only to eventually realize that some of those authors are now on your All-Time Favorites list. I intend to read everything I can by Zdravka Evtimova and Valentin Ivanov, for example. Bulgarian but also universal, all of these stories open a window onto another culture and language and ask us as Anglophone readers to consider what it means to write Bulgarian speculative fiction. What kinds of religious and linguistic traditions infuse these tales? How do they draw on the past to sketch a future or even an alternate historical moment?

We have a treasure trove in ФантАstika, one that is bursting at the seams, which is why I’ll only discuss a portion of these stories though they are all worthy reads. The stories here are organized into three categories–science fiction, fantasy and magical realism, and avant-garde speculative fiction–though many stories could fit into more than one category.

The “science fiction” category offers readers a dizzying array of settings, styles, and characters: time-traveling Worldcon attendees, an American tasked with painting an asteroid black, a weather inspector, the poet Virgil, and many others. Stories that stood out include Elena Pavlova’s “Love in the Time of Con Crud” (2017; tr. by the author and Kalin Nenov 2019), Svetoslav Nikolov’s “Virgil and the Water” (1990, tr. by Radoslav Genchev, Lora Petrova, Kalin M. Nenov, and Vladimir Poleganov 1990), and Aleksandar Karapanchev’s “The Empty Room” (1978, tr. by ? 2004). In Pavlova’s story, one woman must travel back through time in order to stop an epidemic that has broken out at the Worldcon in Helsinki and leads to two devastating wars. Also involving time travel, Nikolov’s “Virgil and the Water” is a fascinating take on the life of the poet Virgil, who turns out to be a bio-robot from another galactic civilization sent to Earth to study the aqueducts and their contribution to the fall of Rome (lead poisoning). Karapanchev’s apocalyptic “The Empty Room” imagines a planet whose environment has been nearly destroyed and its citizens experience Nature via holodeck-like systems in their apartments. The increase in demand for these Nature experiences, though, puts more pressure on the system than it is able to handle.

Of the “fantasy and magical realism” selections, I was especially impressed by the stories about dragons–i.e. the excerpt from Nikolay Tellalov’s To Wake a Dragon (1998, tr. by Kalin M. Nenov, ed. Petar Ruevski, Ilka Chechova, Tsvetomira Dimitrova, and Daniel Bensen) and Genoveva Detelinova’s “The Dragon and the Orange Juice” (tr. by Kalin Nenov 2017). Dragons play an important role in Bulgarian folklore, with the dragon/zmei at times described as a serpent-like creature with four legs and bat wings and at others as a half-man, half-snake; it is often a benevolent guardian. In the excerpt from To Wake a Dragon, we read about a young man who is enjoying a vacation with his friends, but when he accidentally falls into a gorge, he discovers and then winds up freeing a dragon-girl from her stone prison. “The Dragon and the Orange Juice” is a humorous, fast-paced story about a wizard who can only save his father from a dragon by moving through time. Other stories in this category imagine a school for gifted and magical children, a girl born of a fairy and a devil, a town where the wind blows away all of its inhabitants’ words and thoughts, and more.

The “avant-garde speculative fiction” section includes Evtimova’s surrealistic “Impossibly Blue” (tr. by the author 2011) and “Wrong” (tr. by? 2009), and Yancho Cholakov’s “Asked the Soldier, ‘Who Called Me?'” (tr. by Kalin Nenov 2013). Both “Impossibly Blue” and “Wrong” seamlessly blend magical realism with a hint of the sinister: in the former, a woman believes that she hears a world being typed by a man on the “other side” of a blank piece of paper; while in the latter, a depressed and irritable woman meets the man whose manuscript she must translate (though she despises it) and finds out that his car only moves forward if either the driver or passenger is happy. Cholakov’s “Asked the Soldier” is a heady mix of futuristic weapons and Mesoamerican sacrifice in a warped alternate world.

All of these stories are worth reading, and I encourage you to get your own copy of ФантАstika. I also plan to devote an entire month to Bulgarian SFT on this site, so stay tuned.