Flash Fiction From Around the World: “Electric Dreams”

This is the third in a series of posts featuring speculative flash fiction in translation. The series highlights both new and established spec fic writers from around the world. 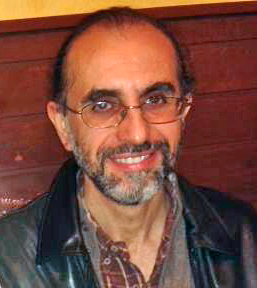 Fabio Lastrucci is a Weird, SF and Fantasy writer, and the author of novels, essays and short stories published in magazines and collections. L’estate segreta di Babe Hardy is his first dark-comedy novel about Laurel and Hardy’s adventures in 1930s Hollywood.

Rachel Cordasco has a Ph.D. in Literary Studies from the University of Wisconsin, Madison, and has taught courses in American and British literature, and Composition. She writes for Book Riot, Tor.com, and runs the website Speculative Fiction in Translation.

It was a political act, far from humanitarian in spirit. The government welcomed the rebels of Luna 6 only because we disliked the outer colonies, simple as that. We couldn’t care less about the diaspora and its exiles.

We just let them come to us, we gathered them up and dumped them in a field. For how long, and to what end, it’s difficult to say.

As an auxiliary of the civil service, I pondered it while smoking cigarettes that tasted like fog, waiting for orders from an increasingly uncertain leadership.

I barely observed the long lines of refugees for the distribution of rations. Out of a sense of detachment or innate repulsion (racism?), I avoided making eye-contact.

It was against the rules to speak to that guy. And yet, I couldn’t help it.

He was slow, shabby, like all the others. He was standing in line, shaking his head now and then for no apparent reason. I waited for his turn to come to ask him why.

With difficulty, he replied that it was to ward off bad thoughts, a habit he learned from his former masters, the colonists.

He then indicated the wrecked cars that filled the refugee camp.

“It was a terrible idea to place us in this cemetery. Insensistive. Being stowed with these dead cars disturbs us. Don’t you realize that?”

I told him that they junkyard had been requisitioned at random, it wasn’t an intentional choice.

He seemed to gaze at the dense grayness of the sky, then launched into a strange speech, stories of utopia and of that which he and the other exiles had tried to create. A free community, where workers of every kind could enjoy the same rights. They had been smashed to pieces. They could do nothing but escape.

Bending over him, my ebony-colored skin was reflected in the plastic and metal armor.

I waited for him to open the power slot and position the cables to recharge the batteries.

His hope was almost palpable.

You deluded robot, I thought to myself. Welcome to Earth…