Review: The Cathedral of Mist by Paul Willems 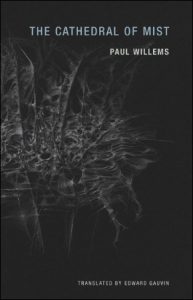 In this collection of surreal, exquisitely-composed and expertly-translated stories, Belgian fantasist Paul Willems (1912-1997) offers us a multitude of dreamscapes both as delicate as gossamer and tangible as a mountain. Cathedrals made of mist, palaces of emptiness, dreams that melt into reality: you’ll find all of these within the six stories included in the slim volume (two essays about reading and writing are included at the end). Form and content work in harmony in a way that I’ve rarely encountered, with Willems lingering on language in a loving way that makes sense once you read the essay “Reading” (a peaen to his deep love of literature and literary creation).

In his introduction to The Cathedral of Mist, translator Edward Gauvin captures the dualities inherent in Willems’s work:

“Permanence in motion, eternity in transience, presence in absence, being in nothingness- from the example of a landscape that held opposites in exquisite suspension, Willems distilled a potent aesthetic. He sought to create images whose power lay in the seamlessness, rather than the impossibility, of their union” (Introduction, xi)

This “permanence in motion” evokes the journeys that many of Willems’s narrators undertake: to the sea, the forest, the mountains. On each journey, they encounter the fantastic: a sumptuous
bed in the middle of a forest in Helsinki (“Flight of the “Archbishop”), a haunting ossuary (“Cherepish”), and, of course, the “Cathedral of Mist” in Belgium’s Forest of Houthulst. Willems’s descriptions of these objects/situations is sumptuous in its own right; for instance:

“The great nave was worthy of admiration. One hundred and fifty-four columns of mist flowed slowly upward, meeting in seven keystones. There the vapor condensed into droplets of water that fell one by one, at random…The deep blue blossoms bristled with slender steel fillets that each drop of water moved to sustained song…Here, there, everywhere, on high and from all sides, the boughs of trees surrounding the clearing pierced the walls and vault of mist.” (50-51)

Such a cathedral perfectly encapsulates the “presence in absence” that Gauvin describes- this is a “structure” with a “form,” but one that defies permanence and melts back into the landscape
from which it was born.

In the most disturbing story of the collection, “The Palace of Emptiness,” Willems sketches an architect who, driven by grief over the deaths of his parents and his violent separation from his wife, draws plans (on the walls of his house) for a structure void of a soul. The references to the husband and wife’s emerging sadistic and masochistic impulses leave the reader haunted by this terrifying kind of emptiness.

Drawn from incidents and reflections Willems noted in his diary over the course of his life, the stories in The Cathedral of Mist reveal a writer obsessed with liminal states, literature being one of them. After all, a book itself is tangible, but the words on the page exist on multiple levels- on the page, in our minds, in our dreams and fantasies. Language evokes that which we cannot capture. As Willems explains in “Writing” (originally given as a lecture), “to write is also to name. An act of faith, ever frustrated. The hoped-for horizon is never reached, or even drawn near, and what we think we grasp fades away the very moment we give it a name. If illusions were not indefatigable, we would no longer write” (77).