REVIEW: Hanzai Japan: Fantastical, Futuristic Stories of Crime From and About Japan 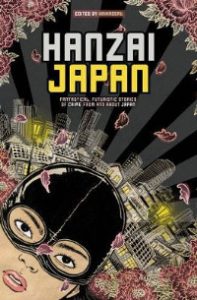 “I haven’t had this much fun in a long time.”

That’s what I kept thinking as I read my way through Hanzai Japan, the latest anthology of tales from and about Japan from Haikasoru. And while “hanzai” means “crime,” that’s not nearly the whole story. After all, Hanzai Japan is a space where East and West collide and commingle, where SFF authors write mysteries and crime stories and crime writers delve into the fantastical and supernatural.  According to editor Nick Mamatas, it is this interweaving of genres that stretches our imaginations and tantalizes us with possibilities that explode our understanding of reality:

What makes this collection even more unique and compelling is its mix of English-language and translated stories. Along with such familiar names (in America) as Genevieve Valentine and Carrie Vaughn, we’re introduced to Japanese writers like Jyouji Hayashi and Setsuko Shinoda. Thus Hanzai Japan is a truly international, cross-genre collection that will make your head spin in a good way.

Why this mention of head-spinning? Well, in this anthology you’ll find, for example, stories about vampires living in a near-future Japan, a talking map, a morphing tattoo, a high school girl who brings down Japan’s technological infrastructure,…I could go on. But for now, I’ll focus on a few of the pieces that especially tickled my fancy: “Rough Night in Little Toke” by Libby Cudmore, “Monologue of a Universal Transverse Mercator Projection” by Yumeaki Hirayama, and “The Girl Who Loved Shonen Knife” by Carrie Vaughn.

Freewheeling and foul-mouthed, the narrator of “Rough Night in Little Toke” takes us on a trip through that part of New York where tattoo shops and comic book stories rub shoulders with bars that blast heavy metal and feature waitresses in impossibly-skimpy clothing. When the narrator, in a drunken stupor, decides to get a tattoo, he gets much, much more than he bargained for.  The “dragon” kanji that he chooses begins changing almost immediately, turning into the kanji for “sound,” “demon,” and even “rabbit.” He ultimately realizes that whenever someone touches his (increasingly painful) tattoo, he temporarily takes on that individual’s personality. And when his friend Steve goes off the deep end…let’s just say that I’m never getting a tattoo. Ever. Something I will be doing, though, is reading more Libby Cudmore, beginning with The Big Rewind (out in February). Her prose crackles on the page and the hyper, frenetic pace of “Rough Night” both entertains and excites.

Then there’s the sentient atlas of “Monologue of a Universal Transverse Mercator Projection.” You read that right. But this isn’t just any talking map- this one “conceals and emphasizes” its own routes and landmarks to most efficiently get its owner to where he needs to go. But don’t talk to it about GPS devices: those are crude, rude addle-headed toys that don’t know the first thing about the human mind. So when this physical atlas realizes that its owner needs its help to carry out his string of murders, the atlas is up to the task. The problems, though, start when the atlas’s next owner begins relying more on a map he made from the skin of one of his victims.

Finally, we come to “The Girl Who Loved Shonen Knife,” with its narrator who is so incredibly fixated on having her band (Flying Jelly Attack) perform at her high school’s spring dance that the planet could explode and reality come apart at the seams and she’d still be holding rehearsals with the other girls of FJA . Only Lizard Blood, a “Lolita death metal band,” threatens this dream, and how could anyone take them seriously when the girls in that band use synthesizers that plug into neuromuscular implants to play their “music”? One teeny tiny itsy bitsy problem with this whole rivalry, though: Japan is crumbling around them.  Cyber attacks on banks have brought the government to its knees and anarchy looms. But then a strange young man arrives at the school and we learn that the leader of Lizard Blood isn’t as innocent as she seems.

So if this doesn’t sound like a trippy, fun, and highly entertaining collection to you, then I’m not 100% sure that you’re human. I mean, maybe you’re a space lizard in a human suit. With terrible taste. If my review of Hanzai Japan did pique your interest, though, then go grab a copy.