“A young Danish couple is recruited by a secret organization based on Venus that makes use of flying saucers (see UFOs) and has planted a hidden colony in Antarctica, aiming to help Earth through its crisis of development and guide its nations to world peace; the foundations of this ideal are duly laid.” 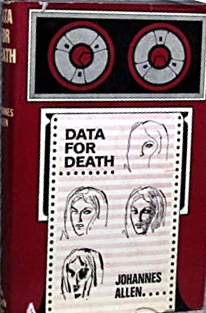 Tells of a criminal organization whose acquisition of advanced computer techniques permits it to blackmail people with information about their time of death.

The Man Who Wanted to be Guilty (1973) by Henrik Stangerup, translated by David Gress-Wright (Marion Boyars, 1982).

“a Satire assaulting the Dystopian welfare state and the Social Democratic party through the a Near-Future tale of a man who accidentally kills his wife and is treated by the state not as a criminal but as a patient, stifling his natural need to assume some personal guilt for the deed.” – SFE

“Mik and Niels, two boys from the occupied Denmark of 1941, crawl through a cave and emerge in 1988, to a world that is both strangely familiar and dramatically different. For sheer survival they team up with a street-wise young punker, who leads them on a headlong race toward Copenhagen while most people are fleeing the city under the shadow of imminent nuclear war. Chased by police helicopters, guard dogs, and motorcycle gangs, the boys endure a series of harrowing adventures as they try to get back to their own era — which seems ironically civilized compared to the havoc of the eighties.”