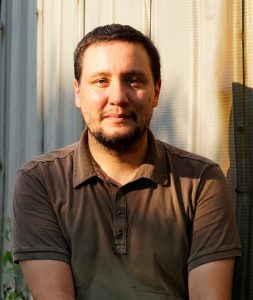 Tyran Grillo is a translator, music critic, and scholar who is currently pursuing a Ph.D. in Japanese Literature at Cornell University. His music-related musings can be found at ecmreviews.com.

Rachel Cordasco: When and why did you start translating Japanese fiction?

Tyran Grillo: My best friend in high school was a boarding student from Tokyo. It was because of him that I became interested in Japan. Whenever he returned home for winter break, he would come back with the latest music, video games, and novels to share. While the former two were relatively easy to appreciate as someone who didn’t know the language, I had to rely on his synopses to understand the latter. He was particularly fond of science/speculative fiction, and indeed the first novel in his collection to catch my eye was Hideaki Sena’s PARASITE EVE. Having played the video game of the same name on his Playstation, I was fascinated to learn of the novel that inspired it, and that its depth and attention to detail went above and beyond Square’s indulgent, if myopic, adaptation. I vowed there and then (this would have been 1997) to learn Japanese well enough to translate it, and sure enough I was fortunate enough to publish it with Vertical a decade later. I was hooked (though, in retrospect, in need of much more experience), as I’ve since translated eight more books, along with a smattering of short stories, from Japanese into English.

RC:  What were some of the challenges you faced while translating MR. TURTLE by Yusaku Kitano? Did you have contact with the author during the translation process?

TG: Every translation project, of course, has its own set of challenges, but MR. TURTLE’s were more formidable than most. For reasons best left to the reader’s discovery, the lyrical structure and wordplay of the novel are unusual, and I struggled to capture the profound simplicity—if not also the simple profundity—of Kitano’s brilliant writing (and, to be sure, if any of that brilliance doesn’t shine through, it’s due solely to my inadvertent obfuscation). In particular, Kitano’s clever punning of the word “turtle” exercised my linguistic muscles more than most literary translations I’ve done, in which difficulties tended toward maintaining the integrity of social and/or cultural discrepancies. As you know from reading the novel, the term “replican[t]urtle” is the running descriptor of its protagonist, a word which originally combines repurika (replica) with kame (turtle) as repurikame. I was in most cases able to come up with suitable portmanteaus in English for such terms. I broke form, however, with the term kamemorii—that is, kame (turtle) combined with memorii (memory). Unable to devise a single compound around it, I settled on “turtle recall,” which maintained the same pun-like feeling and SF feel in English. All of which is to say that MR. TURTLE required me to be freshly creative in order to ensure that the Anglophone reader experience would be true to Kitano and his vision. The author and I were in contact throughout the translation process, and he was more than helpful in answering or clarifying the occasional confusion. He’s one of those rarities who, in his own sense, practices what he preaches, and is head-over-heels dedicated to his characters and the world(s) they inhabit.

RC: You are also a music critic. Have you found any interesting connections between writing that kind of criticism and translating a text?

TG: Definitely. Writing about music is, for me, an act of translation, as I am essentially using one medium to convey something originally expressed in another. It has given me license to be as creative and self-expressive as possible in all forms of writing, translation included, and to be unafraid of letting my personality show in another’s work (any claims to the contrary would be impossible for me to sustain). In the case of MR. TURTLE, my experience as a music critic helped tremendously, as Kitano writes so musically and is himself a musician and performer. I’m not sure whether any of this would be obvious to the reader, though. Maybe it’s all in my head.

RC:  Which Japanese authors do you hope to translate in the future?

TG: The list is always growing, but right now I’m most interested in translating SF authors. To wit: Chōhei Kambayashi, Yūsuke Kishi, and Issui Ogawa. I also have a stash of books—by such authors as Otsuichi, Megumu Sagisawa, Sō Kitamura, and Kengo Ishiguro—that I’ve already translated but which has yet to see the light of publishing. Not least of all, there’s so much more to explore in Kitano’s universe, including his latest turtle-themed novel, KAMÉLIE, which I hope to melt down and recast in my own mold someday.

RC: Are you working on any big projects at the moment?

TG: I am, but the need for secrecy compels me to stay tight-lipped for now. Stay tuned…

Thank you so much for doing this interview, Tyran!