“The Ice Lands by Steinar Bragi is set against the backdrop of Iceland’s volcanic hinterlands, four thirty-somethings from Reykjavík embark on an ambitious camping trip, their jeep packed with supplies.

The purpose of the trip is to heal both professional and personal wounds but the desolate landscape forces the group to reflect on the shattered lives they’ve left behind in the city. As their jeep hurtles through the wilderness, an impenetrable fog descends, causing them to suddenly crash into a rural farmhouse.

Seeking refuge from the storm, the friends discover that the isolated dwelling is inhabited by a mysterious elderly couple who barricade themselves inside every night. As the merciless weather blocks every attempt at escape, they are forced to confront difficult questions: who has been butchering animals near the house? What happened to the abandoned village nearby where bones lie strewn across the ground? And most importantly,
will they ever return home?” 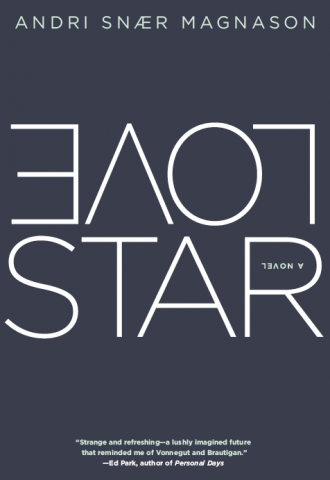 “LoveStar, the enigmatic and obsessively driven founder of the LoveStar corporation, has unlocked the key to transmitting data via birdwaves, thus freeing mankind from wires and devices, and allowing consumerism, technology, and science to run rampant over all aspects of daily life. Cordless modern men and women are paid to howl advertisements at unsuspecting passers-by, REGRET machines eliminate doubt over roads not taken, soul mates are identified and brought together (while existing, unscientifically validated relationships are driven remorselessly asunder), and rocketing the dead into the sky becomes both a status symbol and a beautiful, cathartic show for those left behind.

Indridi and Sigrid, two blissfully happy young lovers, have their perfect worlds threatened (along with Indridi’s sanity) when they are “calculated apart” and are forced to go to extreme lengths to prove their love. Their journey ultimately puts them on a collision course with LoveStar, who is on his own mission to find what might become the last idea in the world.

Steeped in influences ranging from Italo Calvino, Jorge Luis Borges, and Kurt Vonnegut to George Orwell, Douglas Adams, and Monty Python, Andri Snær Magnason has created a surreal yet uncomfortably familiar world, where the honey embrace of love does its utmost to survive amid relentless and overpowering controls.”

Shadows of the Short Days by Alexander Dan Vilhjálmsson, translated by the author (Gollancz, 2019).

“Welcome to Reykjavik. Here, people do as they are told. They follow the rules. They stay in line. Citizens are watched over by the flying fortress, and dissidents are vanished deep into the dungeons of the Nine.

Sæmundur is a student of magic, hungry for knowledge. Except his dangerous theories have seen him expelled from university. Garún is an outcast artist, rejected by her city simply because of who she is.

Both want more from the city they call home. Both will fight against the ruthless police, the masked sorcerers, and the powers that have rejected them. Both will risk everything to change Reykjavík forever.”