Review: The Bottom of the Sky by Rodrigo Fresán

translated from the Spanish (Argentina) by Will Vanderhyden

I’ve got to be honest with you. I seriously don’t know how I’m going to write any kind of coherent review of Fresán’s The Bottom of the Sky, a novel that other novels wish they could be and weep because they know they never can. Like Fresán’s previous novel in English, The Invented Part, this book soars up into the realm of metaphysics, its targets how reality itself is created and by whom.

Almost every single sentence in this book is like its own universe. And Fresán wants it that way. One point he keeps coming back to in his books, interviews, and elsewhere is his frustration with people’s addiction to technology and social media. Short attention spans, shallow interactions, reliance upon machines- Fresán pushes back against these with the kind of prose that at times seems bottomless. Here, as an example, are two sentences from the first section of the novel that together form an exquisite microcosm of the entire work and do what the novel is trying to do on the macro level- that is, describe everything as and through and with science fiction (in this case, through the lens of 2001: A Space Odyssey):

Now, looking back, I get it: I’m but a humble astronaut, descendant of an ape, dreaming of evolving; Ezra is a disorganized and confused computer trying to comprehend the secrets of the universe.

Or this beautiful paragraph:

I’m talking, of course, about classic clocks–far more expressive than the cold red and electric light of digital devices–whose hands are pins that end up fixing you with an epitaph that, if you’re lucky, will mark you for posterity. There, all those minuscule pieces, those gears and springs and turning screws, inside such a small and fragile space, the solid immensity of the centuries. (108)

Guys, the whole book is like this. It’s like a brain spa on every damn page. I’m not making sense, am I.

Ok, let me try this again. The Bottom of the Sky is, in one sense, the story of two Jewish cousins (Isaac and Ezra) from New York who are an integral part of the flourishing science fiction community of the 1950s and 60s. They both fall ecstatically in love with a girl (never named) who joins their circle, and she loves them in return, but she’s tormented by migraines that are so intense that she sees visions and unearthly colors, and one day her unique brain chemistry results in her being turned into a transmitter for an alien species on a far-away planet. The alien who “uses” her to observe Earth is part of a dying race that has itself fallen in love with humanity and because of that, keeps putting off its invasion of Earth because, like a person binge-watching their latest favorite series on Netflix, they don’t want to interrupt the show. They die out slowly, but the effect of having an alien using her brain allows the beloved girl to move through infinite alternate universes, changing, tinkering with, altering reality in order to somehow bring Isaac and Ezra and herself back together. Why were they separated in the first place? Because the girl foresaw one potential end of the world, and preventing it meant severing ties with the two cousins in their “original” reality.

But that’s just the plot. Yes, just the plot. This book is so much more than its plot. It’s a meditation on writing as an act of creation, the author as God, the ways in which authors change the realities of the stories that they write in order to get their characters to do certain things and arrive at a certain conclusion. It’s about the science-fictional aspects of religion: “sudden flashes, flying, above and below, visitors from galaxies on the other side of infinity, appearing and disappearing” (39). Oh and did I mention it’s also about 9/11 and war and invasion and revenge?

The 9/11 sequences are intensely moving.

This is a novel about perspective, and people as pawns in the hands of a greater power, and the place of humanity in the larger universe and across infinite realities, and love that is so pure and sure of itself that nothing–not even the fabric of space and time–can separate those who have experienced that love.

Fresán uses the language and tropes of science fiction to create characters who themselves write science fiction but also inhabit a world that, to the reader, looks very much like something from science fiction. The metafictional nature of the book wraps back around to Fresán’s larger focus throughout his work: the Author as Creator.

The bewildered depression of Isaac in the first part of the book as he tries to understand what is happening to him (he’s being yanked through multiple realities by the girl); the words of the alien intelligence longing and loving from afar in the second part; the regret and love and determination expressed by the girl in the third part as she witnesses the deterioration of her planet through time and continues trying to bring Isaac and Ezra and herself back together, like an incredibly complex Rubik’s Cube- each of these is poignant in its own way and builds on the others to form a coherent whole. 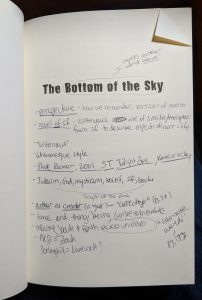 me trying to understand the brilliance

I’ve circled and underlined and written notes and dog-eared pages and re-re-re-re-read pages. The minute I finished my second reading of it, I felt like a third reading was in order.

I hope I’ve given you a sense of the beauty and complexity of The Bottom of the Sky here. And if you’re in Chicago on April 26, you can stop by Volumes Bookcafe and…wait for it…meet Fresán!!!! I’ll be there too, fainting drooling stammering asking Fresán questions about his books, pop culture, science fiction, his writing process, and much more: In Conversation: Rodrigo Fresán with Rachel Cordasco.