Andrea Johnson and her husband live in a college town in Michigan, where their home looks like a library exploded. They are both okay with this living arrangement.  Andrea reviews science fiction and fantasy books at Little Red Reviewer (littleredreviewer.wordpress.com), and talks non-bookish things at Girl Stuff (thegirlstuffblog.wordpress.com). If you chat with her on twitter, @redhead5318, she will tell you more than you ever wanted to know about books, recipes, and life in the Midwest. 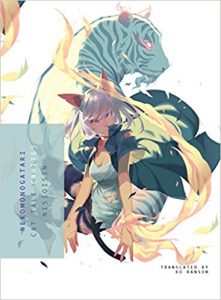 translated from the Japanese by Ko Ransom

Nisioisin’s ongoing and complex Monogatari series follows high school students Koyomi Araragi, his girlfriend Hitagi Senjogahara, and a growing cast of classmates, siblings, vampires, mythological beasts, demi-gods, and apparitions. A series that currently has over 20 volumes published in Japanese, and eight available in English sounds daunting, but like many mystery series, these coming-of-age magical realism thrillers can be read in any order. In fact, the author knows you’ll probably read them out of order (and he didn’t write them in chronological order, either), and humorously includes meta jokes to that effect.

A note on translation: instead of using the Japanese honorifics -san, -kun, and -chan, the translator chose to use “Miss” and “Mister” in lieu of -san and no honorific instead of -kun, -chan.

If you look this novel up on Amazon, you’ll find that it is a duology, made up of Nekomonogatari White and Nekomonogatari Black, basically White Cat Story and Black Cat Story. Previous volumes in the series had been narrated by Koyomi Araragi, and these Cat stories are told from his friend Tsubasa Hanakawa’s point of view. Yes, you really can jump in here. Nisioisin gives enough background that you know Hanakawa, Araragi, and Senjogaraha are in high school, Araragi has become a vampire (of sorts), Hanakawa has a crush on Araragi but won’t say anything because her friend Senjogaraha is dating him, and the three of them have already met a handful of supernatural creatures and aberrations that can possess people. Hanakawa has already survived having an Afflicting Cat aberration possess her, and she’s been warned that having one aberration attach itself to you means you are more susceptible to additional aberrations entering your life and possibly possessing you. Got all that? Ok, we’re ready for Nekomonogatari (White)!

A lot of people at her school are jealous of Hanakawa. She’s a model student, always gets good grades, is always helpful to other students, her hair always looks nice, people compliment her constantly. In a word, she’s put together. All of that is the face she presents to the world. Raised in a loveless family, she barely speaks to her parents, and they barely acknowledge her existence. She has no memory of a time when her mother prepared a family meal, and she sleeps in the hallway because her parents have not set up a bedroom for her. She doesn’t consider her house a home. She has no idea how to live with a family. This loveless existence has been her entire life so far. She looks forward to graduating high school so she can finally escape. The misery of her homelife is oddly understated, perhaps because Hanakawa has never known anything different.

Right at the beginning of the novel, a few unexpected things occur: Hanakawa sees a large Tiger aberration and she doesn’t know how to safely interact with it, Araragi is mysteriously absent from school, and Hanakawa’s house burns down. Suddenly homeless, she finds herself with much bigger priorities than figuring out where Araragi’s gotten to and what is going on with this weird ghostly Tiger. Hanakawa spends one night sleeping in an abandoned school building (it was prominent in previous volumes in the series), and then Senjogahara insists that she stay with her until other arrangements can be made. Senjogarahara lives in a one room apartment with her father, so having a long term house guest might not be tenable.

You’re either going to love Senjogahara or hate her, as her personality is very polarizing. On the plus side, she doesn’t care what other people think of her, she is brave and honest. The flip side of that is that she says provocative things seemingly just for shock value. I was surprised at Hanakawa’s mellow responses to many of things Senjogarahara says to her.

Here’s where Nisioisin starts having fun and getting meta. This novel has many short numbered chapters. The first time a chapter number was skipped, I didn’t even notice it. The second time, I wondered was going on. And then Hanakawa says this:

“Hm?
Didn’t we just skip over a section number?
Am I just imagining things?
Whatever, it’s fine.”

The character is aware her narrative is skipping forward without her knowledge. What? It’s gets weirder, as later in the book, a good 20 chapter numbers are skipped. What is going on?

From here on, this review contains minor and major spoilers for this end of this novel. The ending is such a beautiful and powerful punch to the gut, I really must tell you about it. Unfortunately, the only way to do so is the spoil a surprise that really shouldn’t be a surprise. Onwards!

Hanawaka spends a few nights at Senjogahara’s apartment, and is then invited to stay at Araragi’s house. His parents and sisters don’t seem all that worried that Araragi has all but disappeared, and allow Hanakawa to stay in his bedroom. She awkwardly sleeps in the bed of, and wears the pajamas of the boy she has a crush on, a boy who will never have those same feelings for her. Staying at his house is the first time Hanakawa has experienced what might be called a normal family life – parents who care about their children, younger siblings who want to play, family dinners. It’s so weird that the bedroom window she locked is always unlocked in the morning.

The chapters that were skipped? Someone else has been awake while Hanakawa has been sleeping. Black Hanakawa, the cat aberration that has possessed her, wakes up when her human master is sleeping. And Black Hanakawa speaks in “cat”, with lots of nya’s and meow’s which must have driven the translator up the wall. Here’s a taste of Black Hanakawa’s internal monologue:

“I’m an nyaberration, so it’s nyot something I’m familiar with, but according to my myaster’s knowledge, sleep is important to rest nyot just the body but the psyche too.”

Presenting itself as a mystery of who set the fires and where Araragi has been all this time, Nekomonogatari (White) is in actuality the story of Hanakawa figuring out who she is. She’s had a traumatic childhood, and her coping mechanism is to simply cut those painful parts of her life away from her. This is how Hanakawa has dealt with the trauma that is her life. Why waste time thinking about them, right? But as she cuts away parts of herself, she loses herself. She no longer has preferences, fears, things she takes offense to, things she likes or dislikes. All those provocative things Senjogahara said to Hanakawa were simply Senjogahara’s attempt to get any kind of reaction out of the girl. Senjogarahara knows something is wrong with her friend, she’s just too polite to call it out. Hanakawa’s gotta figure this mystery out for herself.

The ending of this novel nearly destroyed me. There is a scene that starts out with Black Hanakawa facing down the Tiger, and suddenly a third person is there, and it gave me chills. From that scene on, I was a bundle of nerve endings and #allthefeels.

Yes, I am going to tell you what happens at the end, but in a way, I’m not really telling you anything, as you have to experience this for yourself for the weight of it to hit you. Hanakawa faces every aspect of herself. She writes a letter to the personality that has split off from her primary personality. She invites her other personalities to come home. She understands how her personality split and why, she knows how tempting it is to let some separated aspect of herself take on all of her stresses and fears and emotions. She’s become almost addicted to allowing those emotions to flow away from her and to avoid being affected by them. After all, her avoidance of her emotions is what has turned her into a model student, someone her peers look up to, right? But she realizes that without those aspects of herself, who is she? And she wonders, if she brings back those emotions,if she brings back those other parts of herself, who will she be? Is this something that she can move forward from, and for her, what does moving forward mean?

You may have heard of or seen any of the Monogatari animes: the animes are so stylish! Like, really, really stylish! Instead of adding to my experience, the imagery was a distraction. For me, this story works better as a novel rather than as visuals. The story is told through dialog, internal monologue, wordplay, metaphor, and epiphanies, not all of which work as visuals.

If you are not familiar with the Monogatari series, I highly recommend Nekonomogatari (White) as a starting point. If, as I did, you had a less than optimal experience with the anime, you may enjoy these characters and their lives more as a novel rather than a visual experience. I know I sure did.