Flash Fiction From Around The World: “Trick?”

This is the second in a series of posts featuring speculative flash fiction in translation! The series highlights both new and established spec fic writers from around the world. 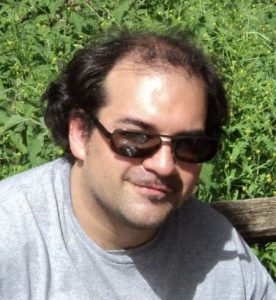 Vincenzo Barone Lumaga is a Weird and New Gothic writer, and the author of short stories published in magazines and collections. His first novel is a supernatural thriller called Lame di Tenebra.

Rachel Cordasco has a Ph.D. in Literary Studies from the University of Wisconsin, Madison, and has taught courses in American and British literature, and Composition. She writes for Book Riot, Tor.com, and runs the website Speculative Fiction in Translation (i.e. this site :P).

Halloween night fell upon the earth, but no one deigned to notice. Their ancestors wouldn’t have behaved like this. For centuries, this had been the night on which people imagined that muddy leaves creaked under the dead’s footsteps. It was possible to see the faces of the deceased looking in the windows of low houses, their transparent figures dancing along with the living in the light of autumn bonfires. But along the gray suburban streets swept by the cold wind, not a blade of grass grew, no trees could be seen, nor autumn leaves or bare earth, unless in some flowerbed full of sickly weeds. And certain superstitions, born in the silent countryside, where every rustle was mysterious, couldn’t survive the noise and unimaginative residents, especially here, in this quiet and dim alley. For everyone, this was simply the night on which children dressed up as little monsters and demanded sweets. All over the world, this was when the little pests brought some ghoulish and childlike merriment from house to house. So it had been all day, especially in this neighborhood.

At the moment, a single child is in the street. He wears a simple costume- a white sheet that was drawn around his small, thin body, and a long red slick across his stomach: the ghost of a murdered little boy. He carries a pouch that the coroner should have closed- a simple but successful disguise. He trips along the dark street, whistling. It was to be the last of the evening; all the others were long gone. He passes the doors of these low houses, ringing the doorbell and delivering that fateful phrase: “Trick or Treat?”

Silence. No response from behind the door.

Again, only silence. No one answered the door, and no one complained about being disturbed during dinner. So he looked down at the front stoop, and the pile of caramels, chocolate bars, brittle, and sugar sticks. He collected it and put it in the pouch that never seemed full. Then he went to the next door.

Light seeped from the windows, but no one gave a sign that they heard the child’s knocking. And so he gathered up the piles of caramels in front of the door and moved on.

Everyone in the houses held their breath at the sound of the doorbell, and then that thin voice outside. They stayed silent behind their front doors and held their breath when they heard the rustle of candy being collected.

Everyone was recalling the moment in which this nightmare began, a night who knew how many years ago. They had lost count.

Even then it had been late, a solitary child left to walk along the street and knock on doors. They had neither opened nor responded, as had been the case throughout the evening. A street of suspicious people that don’t open for strangers, even if it was children in funny outfits. The child was whistling sadly and, lost in his melody, had crossed the street without noticing the approaching roar. And it had been fatal, because the car had turned into the alley with broken headlights. It had happened quickly.

A belated, screeching braking had been accompanied by a low thud. A door opened and slammed shut. Breathless steps. A curse, hurled at that little body thrown onto the street. Other steps, another door. The roar of acceleration, shifting gears, a furious screech of tires headed off into the night.

Some of those who lived there could have written down the license plate number, noticed the car’s make and model, the driver. If someone had come out. They could have saved the child. If they hadn’t wanted to venture out, they could have called someone. The police, the hospital. The thing that another driver wound up doing long after turning there by mistake. For an eternity, the body had remained in the street, wrapped in the pure white sheet on which the red stain slowly spread. Over the body of the child abandoned in the street.

The very child who was now knocking on their doors.