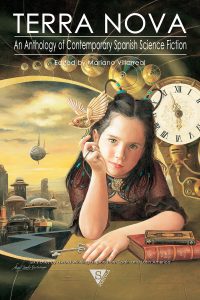 translated from the Spanish by Sue Burke and Lawrence Schimel

Outstanding novella-length stories make up this important collection of contemporary Spanish-language science fiction. Thanks to translators Sue Burke and Lawrence Schimel, us English-language readers are able to see for ourselves just how vibrant, inquisitive, and imaginative this literature is, coming out of Spain, Cuba, Argentina, and beyond.

Villareal and Pestarini have selected stories that push the boundaries of fantasy and science fiction, inviting us to imagine zombification, mind-transference, adaptable androids, and more. Issues of love, companionship, meaning, and power emerge time and again, underscoring that technology might advance but human nature remains the same.

Included in the anthology are the following stories (plus a detailed essay about the state of Spanish sf):

“The Texture of Words” by Felicidad Martínez, translated by Sue Burke.

“Greetings from a Zombie Nation” by Eric J. Mota, translated by Lawrence Schimel.

Having just recently read Felicidad Martínez’s chilling story “The Infestation” in Spanish Women of Wonder, I was excited to check out “The Texture of Words,” and I was not disappointed. Originally published as part of a tribute anthology to the highly-acclaimed Akasa-Puspa saga (by Juan Miguel Aguilera and Javier Redal), this story skilfully imagines a society in which women live as the blind dependents of men, bearing them children and stroking their egos while exercising real power behind the scenes. As Charni, the main character and the queen’s daughter, comes of age, she learns about the world through her other heightened senses and realizes that she, like the other women, must develop strategies and sharpen their wits in order to protect themselves from predatory men. The combination of suspense, a fascinating narrative pov, and exquisite prose makes this a fitting opening to the anthology.

“Deirdre” takes us in a very different direction, as it tells the story of a woman looking for love and companionship with a made-to-order android. After several failed relationships, Emma turns to the Kapek Corporation for a gynoid lover, one that will love her unconditionally and even adapt and learn. And while the companionship and apparent domestic bliss at first seem like the answer to Emma’s prayers, soon she finds herself disturbed by Deirdre’s growing anxiety about the future of their relationship and what kind of life Deirdre would be able to lead were she separated from the woman who “designed” her. A story about emerging self-awareness and the human-robot relationship, “Deirdre” is both timely and engaging. (See also Lola Robles’s “Sea Changes” in Spanish Women of Wonder).

And then we get some zombies! Mota’s engrossing story about a mysterious alien zombie virus and the zombification of Cuba is horrifying but also extremely believable. After much of the world’s population has succumbed to the Z-virus, researchers in Cuba have synthesized a serum that makes the zombies passive and relatively harmless. Pretty soon, the government starts formulating plans to fold zombie-ness into the socialist philosophy, and takes steps toward “passifying” all Cubans by intentionally turning them into the undead. It is up to one researcher to figure out how to resist this impending horror. This story was one of my favorites and made me think of an even more recent zombie story from another Caribbean country- Wicked Weeds.

“Light a Lone Candle” and “Bodies” take contemporary realities like social networks and sex tourism to extremes, offering us visions of a future that seem pretty plausible, given the right conditions. Conde’s story is about the fight for individuality and freedom from the physical social networks that people have created. The ending though, is quite an interesting twist. “Bodies” reads like a fast-paced crime novel, only the criminals are transferring their consciousnesses into unsuspecting bodies. When one man tries to take advantage of the system to escape from his home country by permanently taking over another body, things become…complicated.

“Memory,” the last story in the anthology, is a remarkable and lyrical meditation on the ways in which love and relationships evolve and are shaped by environment and history. With a nod to Bradbury’s beloved Martian Chronicles, “Memory” takes us on a journey to the read planet in the near future, and asks us to rethink our assumptions about family units and relationships. You can read my longer review here.

Terra Nova is a treasure-trove of Spanish science fiction, and I hope to see more such anthologies in the near future.