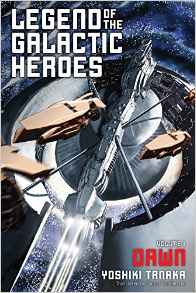 Legend of the Galactic Heroes: 30 Years Ahead of Its Time

While Western Science Fiction and Fantasy is currently experiencing mainstream appeal thanks to successful novel-to-TV adaptations like Game of Thrones, The Expanse, and The Magicians, the Japanese media industry has this formula pegged down as far back as the 1980s. Media tie-ins to series like The Heroic Legend of Arslan, Record of the Lodoss War, and Slayers are par for the course, and Western fandom is probably more familiar with their manga and/or anime adaptations. But these franchises started out as novels, and one such series that I’ve been looking forward to is Ginga Eiyu Densetsu or Legend of the Galactic Heroes by Yoshiki Tanaka.

Viz Media has, at the time of this writing, licensed six of the ten novels (not including spinoffs) in the series. Three have been released so far under the following titles: Legend of Galactic Heroes: Dawn, Legend of Galactic Heroes: Ambition, and Legend of Galactic Heroes: Endurance, all translated by Daniel Huddleston. The first novel was originally published in 1982, while the tenth novel was published five years later. The premise of these novels revolves around two generals, Yang Wen Li and Reinhard von Lohengramm, who are working for opposing sides in an intergalactic war. Majority of the series is the juxtaposition between these two individuals as they come to represent noble yet clashing ideals: Yang Wen Li works for a democratic government, while Reinhard von Lohengramm an authoritarian dynasty; the former wants to retire and settle as a historian, while the latter to rule the known galaxy; one works for a corrupt institution, while the other offers a benevolent renaissance. These are stories that combine the potent elements of military science fiction with philosophy and history.

Legend of Galactic Heroes is not perfect by any means. The most glaring weakness is how few women are represented in the novel or take the spotlight—although both protagonists are eventually supported by competent, brilliant women. Still, the novels work because of its strengths. In today’s current political climate where it seems democracy does not work, I believe Legend of Galactic Heroes strives to answer that question. Yang Wen Li, for example, defends democracy even if the politicians he eventually answers to are conceited and corrupt. Is that a nation worth fighting for? Reinhard von Lohengramm, on the other hand, is the ideal that people hope for in a leader: charismatic, competent, and concerned with the plight of the masses. But the means which von Lohengramm achieves this is by using the authority of a dictatorship. This question is but one of the themes that the novels attempt to tackle. There’s also no shortage of combat as the books are full of stories that involve tactics and strategy, from three dimensional formations to concepts like whittling down the opposing army’s supply chain.

It’s also a novel that gives us insight into Japanese culture. One of the impressions of Western science fiction to me that it’s been pretty much Earth-centric; Earth is this beacon of the best of humanity for the most part, and humans yearning for Earth is portrayed in a positive light. In Japanese science fiction, it’s all about expanding to the stars, and Legend of Galactic Heroes is no exception. Here, yearning for the planet Earth is portrayed as sentimental at best, insidious at its worst. There is an Earth cult that is meddling in the affairs of both sides of the war for example.

It’s hard to imagine that books like Legend of Galactic Heroes has eluded the Western zeitgeist for at least three decades because in many ways, it resembles the current state of the industry. Before The Wheel of Time popularized the epic fantasy genre, there was Legend of Galactic Heroes. Before George R. R. Martin made characters mortal and uncertain, authors like Yoshiki Tanaka were already exploring those techniques and styles. Before studios started adapting science fiction and fantasy novels for syndicated TV, Kitty Films released this epic via direct-to-video.