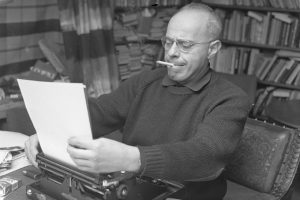 “Stanisław Lem, the Polish novelist, futurologist, literary theorist, satirist, and philosophical gadfly, tried mightily to free his work from the shackles of the present. In dozens of novels, short stories, essays, metaliterary experiments, and futurological treatises, he attempted to imagine everything from a living ocean that could read human minds (Solaris) to a swarm of nonbiological mechanical insects (The Invincible) to a supercomputer many times more intelligent than its human creators (Golem XIV). …For Lem, science fiction meant thinking harder and imagining more.”- Ezra Glinter, “The World According to Stanislaw Lem”

“In addition to many novels and stories, he composed a huge philosophical treatise on the relation of human beings and machines, a good deal of pungently argued literary criticism, a volume of reviews of nonexistent books, a stochastic theory of narrative fiction, an experimental detective novel, speculative essays dealing with artificial intelligence, cybernetics, cosmology, genetic engineering, game theory, sociology, and evolution, radio plays and screenplays. Such staggering polymathic curiosity over such a vast range of material, all of it explored with lucidity and charm, gives his writing a unique place on a Venn diagram in which the natural sciences, philosophy, and literature shade into one another with mutually intensifying vividness and fascination.”- Paul Grimstad, “The Beautiful Mind-Bending of Stanislaw Lem”

My review of Solaris

ESSAYS ON LEM AND HIS WORK

“Balloon to Solaris” by Tomasz Kołodziejczak, translated by Stanley Bill, Words Without Borders, 2009.

“The World According to Stanisław Lem” by Ezra Glinter, LA Review of Books, 2016.

“Stanisław Lem: Did the Holocaust Shape His Sci-Fi World?” by Mikołaj Glińsk, Culture.pl, 2017. 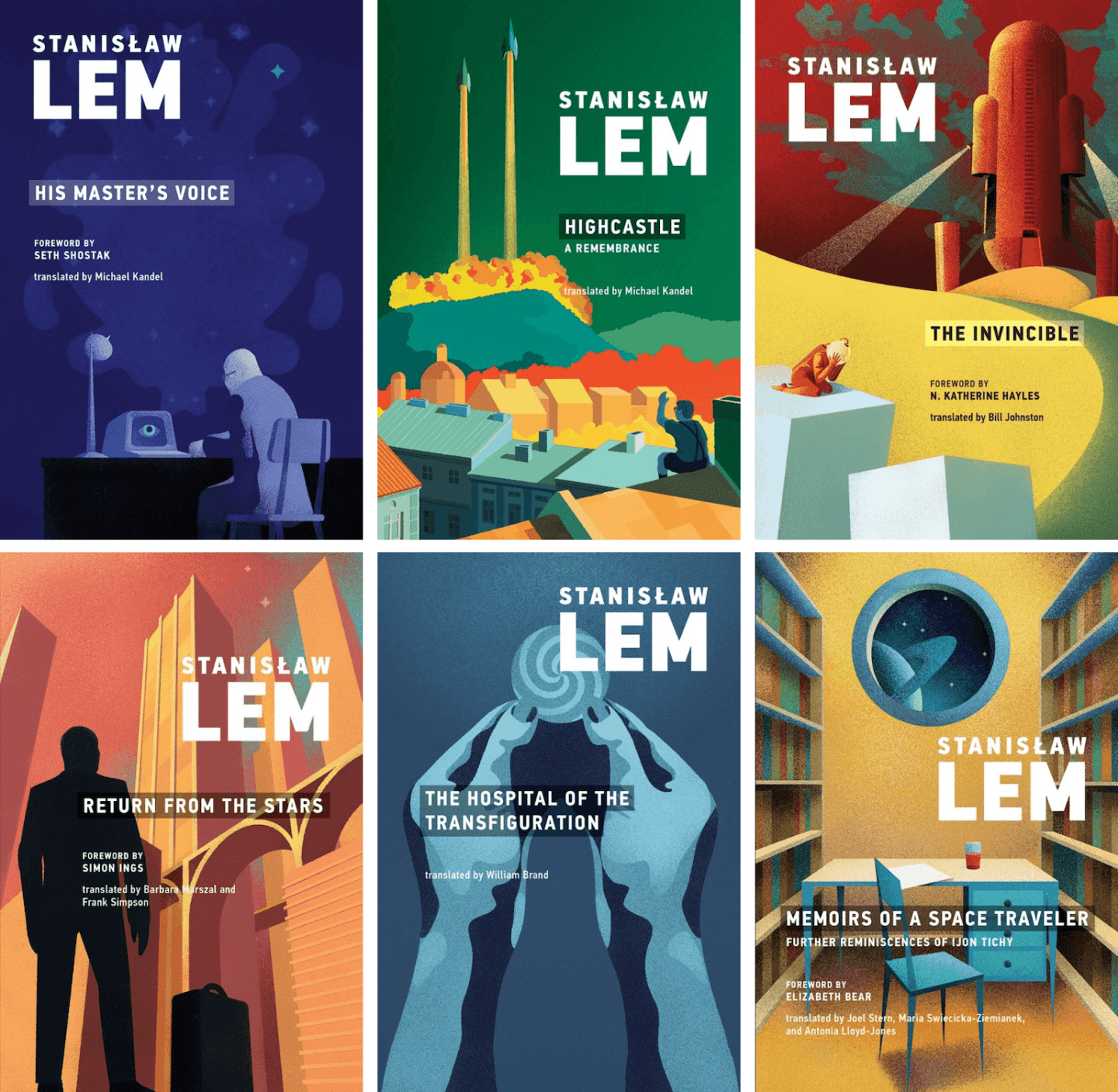 read about the new editions here

“When Kris Kelvin arrives at the planet Solaris to study the ocean that covers its surface, he finds a painful, hitherto unconscious memory embodied in the living physical likeness of a long-dead lover. Others examining the planet, Kelvin learns, are plagued with their own repressed and newly corporeal memories. The Solaris ocean may be a massive brain that creates these incarnate memories, though its purpose in doing so is unknown, forcing the scientists to shift the focus of their quest and wonder if they can truly understand the universe without first understanding what lies within their hearts.”

“The year is 3149, and a vast paper destroying blight-papyralysis-has obliterated much of the planet’s written history. However, these rare memoirs, preserved for centuries in a volcanic rock, record the strange life of a man trapped in a hermetically sealed underground community.”

“In the grand tradition of H. G. Wells and Jules Verne, Stanisław Lem’s The Invincible tells the story of a space cruiser sent to an obscure planet to determine the fate of a sister spaceship whose communication with Earth has abruptly ceased. Landing on the planet Regis III, navigator Rohan and his crew discover a form of life that has apparently evolved from autonomous, self-replicating machines—perhaps the survivors of a “robot war.” Rohan and his men are forced to confront the classic quandary: what course of action can humanity take once it has reached the limits of its knowledge? In The Invincible, Lem has his characters confront the inexplicable and the bizarre: the problem that lies just beyond analytical reach.”

The Futurological Congress: From the Memoirs of Ijon Tichy, translated by Michael Kandel (Seabury Press, 1974).

“The Futurological Congress is one of the most daringly told stories about Ijon Tichy. Tichy is invited to a futorological convention in a Latin America republic shaken by revolution. Eventually Tichy is transferred to a world where in a grotesque convolution both the utopian and anti-utopian visions of the future have been realized. Mockery of futorology – as always with Lem – is accompanied by serious reflection about human disposition for discord with reality.”

“A young officer at Scotland Yard is assigned to investigate a puzzling and eerie case of missing-and apparently resurrected-bodies. To unravel the mystery, Lt. Gregory consults scientific, philosophical, and theological experts, who supply him with a host of theories and clues.“

“Written in the style of a detective novel, The Chain of Chance is classic Lem: a combination of action, hard science, and philosophical investigation. An ex-astronaut is hired to look into the death of several wealthy businessmen. The authorities suspect a pattern, but neither the police nor a supercomputer enlisted for the investigation can crack the case. On a trail leading across Europe, the ex-astronaut barely escapes numerous attempts on his life. Having set himself up as a potential victim, he realizes that he may now be the target of a conspiracy–and that the conspiracy is not the work of a criminal mind, but a manifestation of the laws of nature. Certain patterns have begun to emerge from the chaos of modern society. Some of those patterns can be fatal…”

“Ijon Tichy is the only human who knows for sure whether the self-programming robots on the moon are plotting a terrestrial invasion. But a highly focused ray severs his corpus collosum. Now his left brain can’t remember the secret and his uncooperative right brain won’t tell. Tichy struggles for control of the lost memory and of his own two warring sides. “

Return From the Stars, translated by Barbara Marszal and Frank Simpson (Secker & Warburg, 1980).

“Stanisław Lem’s Return from the Stars recounts the experiences of Hal Bregg, an astronaut who returns from an exploratory mission that lasted ten years—although because of time dilation, 127 years have passed on Earth. Bregg finds a society that he hardly recognizes, in which danger has been eradicated. Children are “betrizated” to remove all aggression and violence—a process that also removes all impulse to take risks and explore. The people of Earth view Bregg and his crew as “resuscitated Neanderthals,” and pressure them to undergo betrization. Bregg has serious difficulty in navigating the new social mores. While Lem’s depiction of a risk-free society is bleak, he does not portray Bregg and his fellow astronauts as heroes. Indeed, faced with no opposition to his aggression, Bregg behaves abominably. He is faced with a choice: leave Earth again and hope to return to a different society in several hundred years, or stay on Earth and learn to be content. With Return from the Stars, Lem shows the shifting boundaries between utopia and dystopia.”

“By pure chance, scientists detect a signal from space that may be communication from rational beings. How can people of Earth understand this message, knowing nothing about the senders—even whether or not they exist? Written as the memoir of a mathematician who participates in the government project (code name: His Master’s Voice) attempting to decode what seems to be a message from outer space, this classic novel shows scientists grappling with fundamental questions about the nature of reality, the confines of knowledge, the limitations of the human mind, and the ethics of military-sponsored scientific research.”

“The planet Quinta is pocked by ugly mounds and covered by a spiderweb-like network. It is a kingdom of phantoms and of a beauty afflicted by madness. In stark contrast, the crew of the spaceship Hermes represents a knowledge-seeking Earth. As they approach Quinta, a dark poetry takes over and leads them into a nightmare of misunderstanding.“

“A six-man crew crash-lands on Eden, fourth planet from another sun. The men find a strange world that grows ever stranger, and everywhere there are images of death. The crew’s attempt to communicate with this civilization leads to violence and to a cruel truth-cruel precisely because it is so human.“

“These wickedly authentic introductions to twenty-first-century books preface tomes on teaching English to bacteria, using animated X-rays to create ‘pornograms,’ and analyzing computer-generated literature through the science of ‘bitistics.'”

The Cyberiad: Fables for the Cybernetic Age, translated by Michael Kandel (Seabury Press, 1974).

“Ranging from the prophetic to the surreal, these stories demonstrate Stanislaw Lem’s vast talent and remarkable ability to blend meaning and magic into a wholly entertaining and captivating work.“

“Stanislaw Lem’s set of short stories, written over a period of twenty years, all feature the adventures of space traveller Ijon Tichy and recount him spinning in time-warps, spying on robots, encountering bizarre civilizations and creatures in space and being hopelessly lost in a forest of supernovae. This is a philosophical satire on technology, theology, intelligence and human nature from one of the greatest of science fiction writers.”

Stories include: “The Three Electroknights,” “Uranium Earpieces,” “How Erg the Self-Inducting Slew a Paleface,” “Two Monsters,” “The White Death,” “How Microx and the Gigant Made the Universe Expand,” “Tale of the Computer That Fought a Dragon,” “The Advisers of King Hydrops,” “Automatthew’s Friend,” “King Globares and the Sages,” “The Tale of King Gnuff,” “The Sanatorium of Dr. Vliperdius,” “The Hunt,” “The Mask”

“In A Perfect Vacuum, Stanislaw Lem presents a collection of book reviews of nonexistent works of literature–works that, in many cases, could not possibly be written. Embracing postmodernism’s “games for games’ sake” ethos, Lem joins the contest with hilarious and grotesque results, lampooning the movement’s self-indulgence and exploiting its mannerisms. Beginning with a review of his own book, Lem moves on to tackles (or create pastiches of) the French new novel, James Joyce, pornography, authorless writing, and Dostoevsky, while at the same time ranging across scientific topics, from cosmology to the pervasiveness of computers. The result is a metafictional tour de force by one of the world’s most popular writers.“

Stories include: “The Test”, “The Conditioned Reflex”, “On Patrol”, “The Albatross”, “Terminus”

“In Pilot Pirx, Lem has created an irresistibly likable character: an astronaut who gives the impression of still navigating by the seat of his pants-a bumbler but an inspired one. By investing Pirx with a range of human foibles, Lem offers a wonderful vision of the audacity, childlike curiosity, and intuition that can give humans the courage to confront outer space.“

The Cosmic Carnival of Stanisław Lem: An Anthology of Entertaining Stories by the Modern Master of Science Fiction, edited by Michael Kandel (Continuum, 1981).

Stories include: “The Conder” from The Invincible, excerpt from Solaris, “The Test,” from Return From the Stars, excerpt from The Futurological Congress, “Two Monsters,” “The Second Sally,” “Tale of the Computer That Fought a Dragon,” “The History of Zipperupus,” “The Seventh Voyage,” “The Fourteenth Voyage,” “Marcel Coscat: Les Robinsonades”

“Memoirs of a Space Traveler follows the adventures of Ijon Tichy, a Gulliver of the space age, who leads readers through strange experiments involving, among other puzzling phenomena, faulty time machines, intelligent washing machines, and suicidal potatoes. The scientists Tichy encounters make plans that are grandiose, and strike bargains that are Faustian. They pursue humanity’s greatest and most ancient obsessions: immortality, artificial intelligence, and top-of-the-line consumer items. By turns satirical, philosophical, and absurd, these stories express the most starkly original and prescient notions of a master of speculative fiction.”

“Commander Pirx, who drives space vehicles for a living in the galaxy of the future, here faces a new series of intriguing adventures in which robots demonstrate some alarmingly human characteristics.”