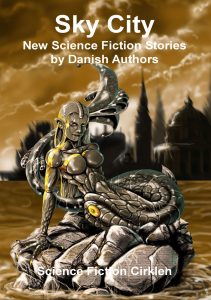 “Sky City” by Manfred Christiansen. A woman wakes up in a tall skyscraper built by nanobots. Do they want something with her? This is the title story for the volume and sets the anthology’s tone.
“Departure” by Niels Gerloff. A research team on Europa prepares to boldly go…
“The White Bear” by Richard Ipsen. A tale set in a future China.
“Helium Loves Company” by Glen Stihmoe. In a post apocalyptic world half destroyed by nanotechnology run rampant, an engineered team explores the desolation to encounter…
“The Last Astronaut” by Flemming Rasch. An astronaut lands on a distant planet after a journey of hundreds years. The next day another ship lands and a fourth generation descendent of the first astronaut steps out…
“The Organism on Maneo” by Morten Brunbjerg. On a spaceship a crew member discovers an unusual creature…
“The Tourist” by Patrick Leis. A military officer is questioned as to why he authorised an attack in a civilian area of his own country. The motive is obscure and further investigation leads to the unbelievable…
“Know Your Target Audience” by Dan Mygind. A new way of getting audience feedback help tailor programme makers’ efforts which in turn feedback to the audience. But the result is not quite as expected.
“The Red Parakeets” by Camilla Wandahal. Future genetic engineering is not just controversial, it splits society…
“The Short Arm of History” by Kenneth Krabat. They were queuing up to enter the portal to who-knows-where… This story is vaguely reminiscent of Pohl’s novel Gateway (1977), and there is nothing wrong with that as you should not keep a good SFnal idea down and this variation of the theme is an interesting one.
“A Contribution to the History of Denmark” by Soren Hemmingsen. In 1961 an expedition to Lapland in search of minerals found the tail of a frozen dinosaur… This is the story of the days that followed.
“When the Music’s Over” by A. Silvestri. A spaceship lands in Central Park. What do they want..? Now without wishing to introduce a spoiler, I was surprised at the aliens’ disdain for the character Captain James T. Kirk.
“The E-Puzzle” by Nikolaj Hojberg. In the far future questions of soul and death will be answered, but then how will we deal with mortality and, as important, how might we cope with the afterlife?
“Leading, Feeding” by Miriam Pederson. An alien dissection, but ultimately who is studying whom?
“You are my Best Friend” by Camilla Friis. We all need friends. But what are friends?
“Dreams of Stone” by Brian Ornbol. The city was big. I mean really big. You may have thought it a long way down to the chemist but the city really was big…
“The Green Jacket” by Gudrun Ostergaard. Thirteen year old Ivara has more than everything she can want but has not seen the world beyond her tower city. So she decides to have a look.
“In the Surface” by Sara Tanderup. A tale set in a future where the sea covers the planet.
“Interrogation of Victim No. 5” by Lars Ahn Pedersen. The patient is questioned as to what happened to her… and then the patient realises…   This story is one of the best in the anthology and was a good note on which to end.

A work of late-19th-century gothic horror depicting the tensions between science and the supernatural. 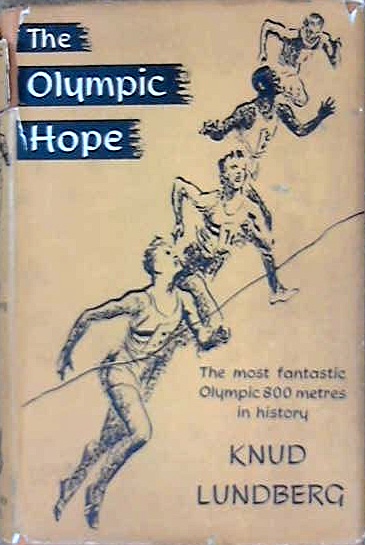 The Olympic Hope: A Story from the Olympic Games 1966 by Knud Lundberg, translated by Eiler Hansen and William Luscombe (Stanley Paul & Co., 1958).

This book is generally regarded as a work of sports-science fiction that focuses on doping and deviance at the 1996 Olympics. However, the book can also be read as a work of resistance to modern sport and, moreover, a work that demonstrates a sense of ‘Danishness’ that is here interpreted as ‘the law of Jante’, a modesty code that, it is suggested, has some implications for sport.